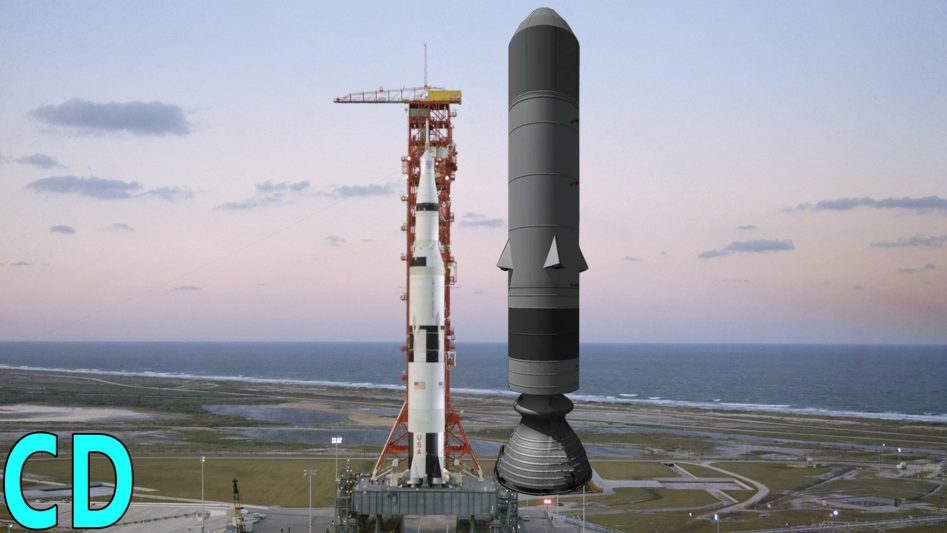 In the history of space, one rocket stands out as an icon of not only the space race but of the mighty power it symbolised.

That one rocket, which is still the Tallest, heaviest and most powerful ever built, was the Saturn V, which was designed to take men to the moon and later launched the first American Space station, Skylab.

But if things had been a little different back in the 60’s we might have had a different rocket to hang on the bedroom walls of the space fans of the 70’s and 80’s.

In the early 1960’s, a rocket was designed which made the Saturn V look small comparison.

This was the Sea Dragon, a super heavy lift rocket that would have been 10 times more powerful with 80 Million lb’s of thrust compared to the Saturn’s 7.8 million and that was from just one massive engine.

It was designed to lift a payload of 1,100,000 lbs into orbit, compared to the 310,000 lbs of the Saturn V. This meant it could have lifted an entire space station into Low Earth Orbit in one mission.

The rocket bell of this single engine would be so large at 75 feet in diameter, that you could fit the entire first stage of a Saturn V with all 5 of its F1 engines inside with room to spare.

So what happened to the Sea Dragon and why didn’t it get built ?.

At the time of the design in 1962, it was thought that by the 1970’s, 80’s and beyond, thousands of people would be working in space and on the moon, even on Mars and as such, rockets with huge lifting capabilities would have been in great demand as they would dramatically lower the cost of getting materials into space.

The sea dragon was designed by Robert Truax, a US navy Captain and Rocket engineer. He was one of the pioneers of American rocketry and worked on the Thor and Polaris missiles amongst others. His team debriefed the German Rocket engineers at the end of World War 2 including Werner Von Braun who went on to design the Saturn V.

Traux believed it was complexity that drove up the cost of rockets and not their size. His designs for the Sea Dragon were very simple but very big. The sea dragon would have been 75 ft in diameter and 500ft tall, half the Hight of Chrysler building.

This type of  low-cost super heavy rocket is now known as a “big dumb booster” due to its simplistic design.

Instead of having very complicated turbopump driven engine like the Saturn’s, his were the simplest possible design for a rocket engine.

In place of having powerful fuel pumps to push the huge amounts of rocket fuel and oxidizer in the engine, he proposed a pressure fed system with a separate liquid nitrogen tank to pressurise the fuel tanks, this would push the fuel into the massive combustion chamber.

His engines were literally not much more than the valves to turn on the fuel and the huge engine bell, this would make them not only much cheaper to manufacture but much easier to refurbish and reuse, unlike the F1 engines of the Saturn which were left crash in the sea and be discarded.

The rocket would be a two stage design, the first stage would lift it to a height of 130,000 ft before it separated and fell back into the sea, using drag bags to slow it impacts with the water, where it would be recovered for reuse.

Although it’s design was much less efficient that of the Saturn, the overall increase in size made up for the short fall, so in theory it would be much cheaper per pound of payload compared to smaller rocket systems, even ones the size of the Saturn.

However, there were problems of making such a huge rocket, firstly just transporting the parts, let alone the fully assembled version, this together with the 80 million lbs of thrust meant that it could not be launched from land.

This amount of thrust would have destroyed any existing launch pad. It’s estimated that the noise level at take-off would have been around 165 decibels at 5 miles away or equivalent of standing next to 5000 hp top fuel dragster at full throttle.

Then there is the exhaust plume, this would have been up to 1 mile long. For these reasons, the Sea Dragon would have be launched at sea, hence the name, not from a floating platform but from beneath the water.

This is not as mad as it seems and there have been examples of sea-launched rockets before and after.

In 2002 a low-cost sea-launched rocket delivery system called the Aquarius with a very similar design the Sea Dragon but much smaller was proposed to deliver consumables into Low earth orbit for supplying things like the space station but failed to get selected.

The US Navy also did research into floating launch rockets and found that the take-off was smoother and less stressful on the rocket than that of a normal land based take off.

And if you wondering why the water didn’t put out the flames, it’s because the rocket has it own liquid oxygen supply just like rockets that work in space where there is no air and the thrust just blows the water out of the engine bell.

In fact the sea makes an excellent launch platform as it’s indestructible, it requires little in the way of support systems and thus is very cheap. It also provides excellent shock and noise suppression and even allowing for a slight swell, the density of the water helps guide the rocket up in the initial moments of lift off till it exits the water.

As part of the low-cost build and the size of the sea dragon, it would have been built in a shipyard, a bit like a submarine from commonly used materials including aluminium, sheet nickel steel and stainless steel for the engine bell.

It would then have been floated into position and then be fuelled allowing it to sink so that just the top of it was sticking out of the water and It would have been supported by floatation tanks under the rocket.

One Idea was to use a nuclear aircraft carrier to provide the power to electrolyse sea water to make the hydrogen and oxygen fuel, though the first stage would have been powered by RP-1 or Kerosene and oxygen, and the second stage by hydrogen and oxygen.

Although smaller scale versions called the Sea Bee and Sea Horse were made that proved they could launched under water, the project came to an end when due to budget cuts, NASA’s Future Projects Branch was closed.

But even if it had been built it would have been a very short life, it was just too big, there just wasn’t enough stuff to be lifted into space to make the economies of scale it promised viable.

The technology is still as perfectly valid today as it was in the 1960’s and maybe in the future when a large amount of equipment is needed to lifteintoto space, something on a similar scale might find a role once more.

How do you Protect Spacecraft from the Radiation of Space?