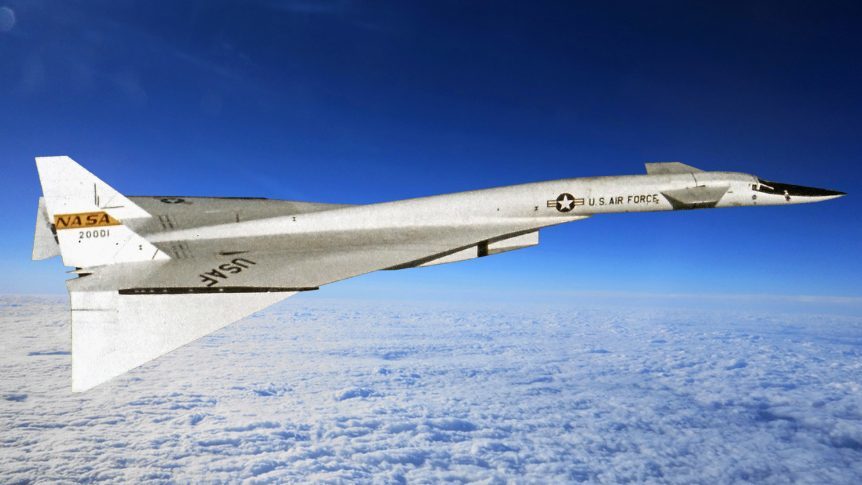 “That’s not a plane, it’s a 3 plane formation” that’s what General Curtis LeMay said of the plans for the WS-110 supersonic replacement for the B-52 back in 1954.

Back in the early 1950s, the B-52 was USAF’s main nuclear delivery platform but with the increasing sophistication of the Soviet defences, a new supersonic nuclear bomber was called for which would stretch the limits of the technology to beyond what was thought possible just a few years before.

The plane that would emerge from the WS-110 design process was the XB-70 Valkyrie. It would be one of the biggest in the world and capable of cruising at Mach 3, something which no aircraft of this type is capable of doing even today. It would also fly at 77,000 feet – 23,500 meter s, have a range of 4,280 miles or 6,900 km and carry up to 14 nuclear weapons.

The problem with large planes and payloads is the need for powerful engines which in turn require a lot of fuel which also has to be carried making the plane heavier and reducing the available payload, so in the 40’s and 50’s alternative methods of propulsion were researched.

Nuclear was seriously considered as a power source for jet engines. A nuclear reactor would heat the air in place of jet fuel and could run for weeks or months without the need for refuelling.

But problems with the extra weight of the radiation shielding required for the crew and the low thrust output from early engine designs meant that it became unpractical. Also if a nuclear-powered plane crashed it would be a much bigger problem than a conventional jet due to the radioactive contamination.

If you want to find out more about Nuclear powered planes, trains and automobiles we have a video on the link showing now.

Also during in the 1950’s, a new type of jet fuel was being developed called high energy fuel or Zip fuel. This could deliver up to 40% more energy for the same weight. This was achieved by adding boron, a high energy, low mass element.

The problem with this is that it made both the fuel and the exhaust toxic. When the Zip fuel was burned in the engines it produced solids that were sticky, corrosive and highly abrasive and created a lot of black smoke which could reveal the plane’s position even at high altitude. These solids built up on the turbine blades making them less efficient and in some case causing the engines to fail completely.

One method to get around these issues was to use it in afterburners as this didn’t affect the engine itself. This would be used for the quick dash up to supersonic speeds over enemy territory whilst using normal jet fuel for the rest of the journey.

This and the high cost of making the Zip fuel and the inability to overcome the engine damage it caused meant that it also went the same way as the Nuclear powered engines and by 1959 Zip fuels were dropped too.

Both the Nuclear engines and the Zip fuels were proposed for the WS-110 before a new higher density type of conventional jet fuel called JP-6 was developed.

To overcome the extra fuel needed, the North American Aviation’s WS-110 design had “floating panels” at the end of the wings which were essentially huge fuel tanks, these would have been jettisoned when it went to supersonic leaving much shorter trapezoid shaped wings.

LeMay, head of the USAF Strategic Air Command thought that it was too complicated and dismissed the idea and in 1956 the USAF told the designers to continue working on a better design.

Research on supersonic flight was progressing rapidly and narrow delta-shaped wings took the place of swept back or trapezoidal shaped ones of the original WS-110 design along with newer engines that could cruise at supersonic speeds.

During the engine research, a discovery was made in that if the engine was optimised for supersonic speeds, it burned twice much fuel as it did at subsonic speeds but flew four times as fast, meaning that the most economical speed, was the maximum speed.

It was now easier and more economical to cruise almost the entire flight at Mach 3 than it was to fly slower to the target and then dash over the enemy positions supersonically as the older WS-110 design did.

North American also discovered some obscure wind tunnel research into a phenonium now known as compression lift which used the high-pressure shock wave created at the front of the plane at supersonic speeds.

By designing a combination of the wing position relative to the nose, large wing tips which could be tilted down to contain the high-pressure air and a specially shaped engine intake for the 6 centrally placed engines, the plane could ride on the shockwave created by flying supersonically, thus reducing the amount of fuel required.

The new design was approved and given the designation B-70 with the prototypes getting the “X” for experimental aircraft, so they became the XB-70. The name “Valkyrie” chosen as the winning entry in USAFs “Name the B-70” contest.

It was also around at this time in the late 50’s, that soviet surface to air missile technology became much more effective. This removed the high speed, high altitude advantage that the new B-70 design would have and flying at low altitude under the radar, it was not much faster than the B-52 it was meant to replace but with a smaller payload and shorter range.

This combined with cost cutting as intercontinental ballistic missiles, ICBM’s became a cheaper, unstoppable way to deliver nuclear weapons, meant that by 1961 when Kennedy was in office the program was scaled back and the bomber concept was dropped.

Instead, it would become the XB-70 research plane to study supersonic aerodynamics and propulsion in large aircraft with first three, then two prototypes being built.  However, because of its cutting-edge design, things were not so straightforward once the build got underway.

Although the XB-70 was considered for reconnaissance as the RS-70, the other Mach 3 aircraft in development at the time, the Lockheed A-12 which would become the SR-71 Blackbird was superior in terms of the altitude it could fly at, maximum speed and it’s much lower radar cross section so that it would harder to detect.

Unlike the SR-71, the B-70’s were designed to be a large fleet of aircraft but there wasn’t enough titanium that could withstand the heat generated at Mach 3 available for that many aircraft. This led the USAF earlier in the design process to request the body of the aircraft to built out of cheaper more readily available materials.

So a special combination of a Stainless steel honeycomb skin was used over areas where the heat was less of an issue, up to 450 degrees F, 232 degree Celsius. The forward 60 feet or 20 meters of the plane would use titanium where the temperatures would reach 650 degrees F, 343 degree Celsius and the engine compartment used a nickel-based alloy called Rene 41 that could withstand 1200 degree F or 650 degree Celsius.

But this mixture of different metals caused an unforeseen issue of electrolytic corrosion and led to a 2-year delay as the plane was stripped and rebuilt.

The design also called for pressurised fuel tanks but when they tested them with normal jet fuel, they leaked…. A lot. This was down to tiny flaws in the welding as the tanks were fabricated. It took a further 18 months to find a fix by lining the insides with a special coating.

Finally, on 21st September 1964, the maiden flight of the first XB-70 took place but that didn’t go to plan either. One of the six engines had to be shut down and there was a malfunction on the undercarriage. This led to the brakes locking up on one side when it landed which burst the tires setting fire to the undercarriage.

On following tests, after the XB-70 was taken supersonic, the flexing of the airframe which it was designed it to do, caused much of the white paint to flake off and on two occasions large pieces of the wings leading edge was ripped off as the stainless-steel honeycomb skin failed due to poor quality control.

But the most serious incident wasn’t caused by anything failing on the XB-70. On 8th June 1966, after a successful supersonic test flight, XB-70 number 2 was returning with four chase planes in a tight formation and being filmed for GE who made the engines for all the planes.

The filming had just finished as a starfighter F-104 was flying about 70 feet or 20 meters from the right-wing tip. It’s believed that the pilot couldn’t see the wing tip to his immediate left and above and that he was using the forward part of the XB-70 as his visual reference point.

For some reason, he drifted a little too close and touched the right wing. The vortex from the wing tip then sucked the small fighter up and over the tail of the XB-70 hitting both of the vertical tail fins before exploding and crashing into the left-wing tip which then broke away.

Without its rudders and the wing damage, the XB-70 entered an uncontrollable flat spin and crashed to the ground. The pilot, Al White ejected and survived but was seriously injured. The XB-70 co-pilot Carl Cross was unable to eject went down with the plane. The F-104 pilot, NASA chief test pilot and one time X-15 pilot Joe Walker also died as a result of the collision.

The remaining XB-70 continued it research until 1969 when it was retired to National Museum of the United States Air Force at Wright-Patterson Air Force base where it has been ever since and the XB-70 Valkyrie became a part of supersonic history.