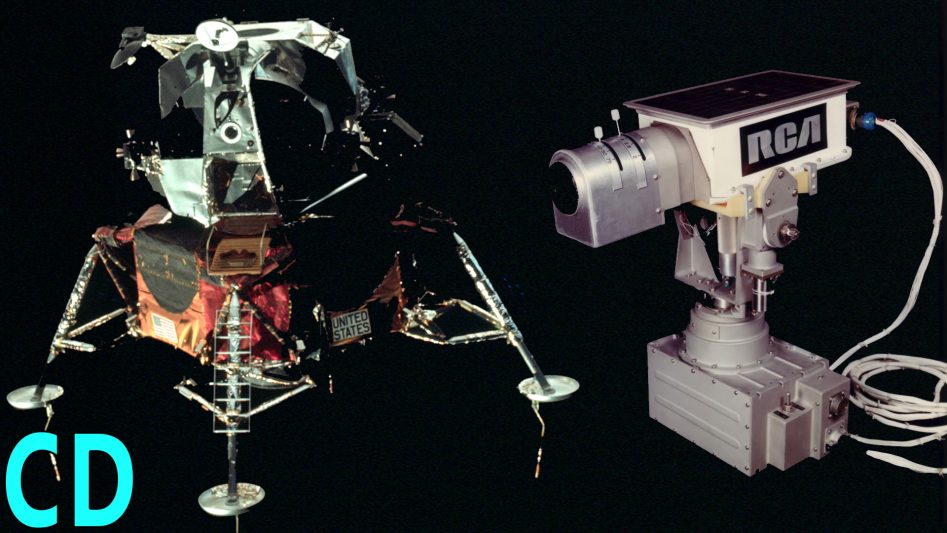 This is the Apollo 17 Lunar Module, and the moment when Gene Cernan and Harrison Schmitt, the last men to stand on the Moon’s surface left to return to earth… but if no one else is there, who’s operating the camera as it pans up and follows the ascent module?

The view is actually from a video camera mounted on the Lunar Rover, which remains on the moon to this day. Remotely operated by ground control via the large high gain antenna on the rover itself, the shot was meticulously planned, and timed to account for the 1.2-second delay in radio signal across 384,000 kilometres or 238,000 miles.

NASA contracted the American company RCA to design a portable camera that could film the astronauts during their rover excursions. At the time broadcast cameras were bulky and heavy. But RCA’s camera was about the size of a loaf of bread: and weighed 2 kilogrammes (4 and a half pounds). It captured video with a resolution of 320 by 200 pixels, at a rate of 10 frames per second.

This hardy little camera could operate up to a temperature of 200 degrees Fahrenheit, or 93 degrees centigrade. Its transmission unit was fitted with radiators and a beeswax-filled casing which absorbed heat as the wax melted. However, astronauts still had to regularly brush the dust off the foil covering to maintain its reflective qualities and stop the camera from overheating and permanently shutting down.

Before the extended ‘J-missions’, landing and launch from the lunar surface could only be filmed from within the manned module. On the Apollo 15 mission in 1971, there was a new, ambitious plan: to leave the camera on the vehicle, and film the launch from the so-called ‘VIP spot’ close to the Lunar Module.

However, during the three days of operations on the surface, the clutch on the camera’s motorised mount became prone to slipping and kept getting stuck. Ground control regularly had to ask the astronauts to reset the camera’s position. Instead of risking getting the camera stuck after the launch, the decision was taken to leave the camera facing forward, to carry out further lunar surface surveys in the days ahead.

On the next mission in 1972, the Apollo 16 astronauts mistakenly left the rover closer to the Lunar modules than they had been instructed, and at launch, the camera was only able to track for a few moments, before losing its target.

Apollo 17 was the third and final chance to film the complete launch. NASA communications operator Ed Fendall recalled that Commander Eugene Cernan knew that if he didn’t park the rover in the right place Fendall ‘would kill him’.

Watching the clock, Fendall sent the command to initiate the camera’s tracking sequence a moment before launch. It worked: the camera panned up and followed Gene Cernan and Harrison Schmitt’s ascent until the LM, named ‘Challenger’, faded from sight. Fendall angled the camera down again, to film the dust settling on the descent stage and equipment remaining on the valley of Taurus-Littrow.

If you listen to the film’s audio track, you can hear Harrison Schmitt curse as sets up the smaller, 16mm Data Acquisition Camera, inside the LM. Schmitt says “Camera’s not going to run without me holding it.”, then Cernan replies “Forget the camera.” These turned out to be among the last audible words spoken by mankind from the lunar surface – to date. A few moments after the launch, Schmitt presumably picked up the camera again and filmed the rest of the ascent.

After ‘Challenger’ rendezvoused with the Command/Service module in lunar orbit, Cernan and Schmitt transferred samples and equipment, before separating the CSM to return to Earth. The abandoned Lunar Module was scheduled to deorbit and crash only fifteen kilometres from the Apollo 17 site, and Ed Fendall’s plan was to film it. The team had run detailed calculations to position the camera in the right direction: however, the crash was never spotted on camera.

Despite the challenges faced in designing and operating Apollo’s cameras, ultimately they succeeded in capturing some of the most enduring images of the twentieth century.

What if Apollo had crashed on the Moon ?

Are you, really you ?