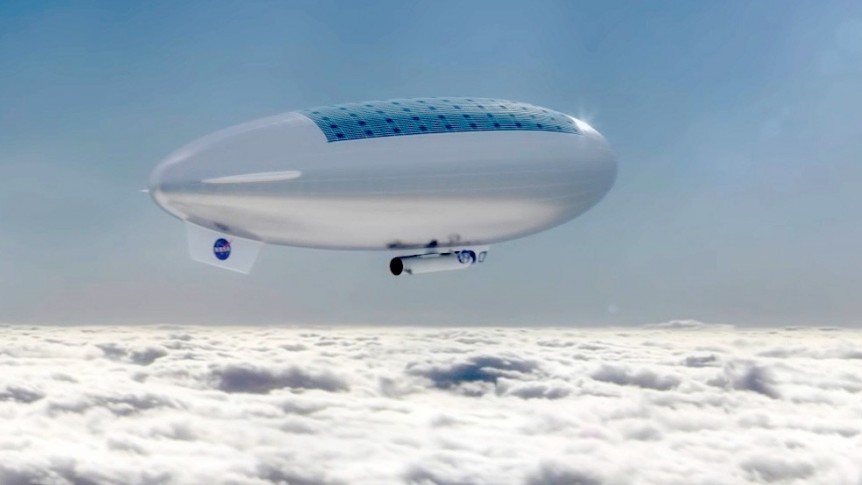 If you thought airships like the Zeppelin were a thing of the past and consigned to the history books for their dangerous ability to burst into flames, then think again because NASA is looking at using them to explore Mars and Venus.

On March 21st, 1999, a giant silver shape descended from the sky to thump down, bounce, then land in the Egyptian desert. It was the giant balloon Breitling Orbiter 3, and from the red capsule beneath emerged Bertrand Piccard: grandson of August Piccard, the first man to reach the stratosphere, and son of Jacques Piccard, who in 1960 was the first to reach the Challenger Deep aboard the submersible Trieste, so the same family had achieved the highest and deepest records. With his co-pilot Brian Jones, Bertrand had completed the ultimate balloon flight: 40,814 kilometres, or 25,361 miles in less than 20 days, to achieve the century’s last great circumnavigation.

Breitling Orbiter 3 travelled around the Earth fuelled by twenty-eight cylinders on 10,000lbs or four and a half tons of propane. This endurance far exceeds the capabilities of powered aircraft, with the sole exception of the latest solar-powered aeroplanes. Airships were one of the first technologies to take humans into flight and the most well known and infamous were the German Zeppelins. According to an elementary principle: using a lighter-than-air ‘envelope’ or balloon to lift a manned cabin or payload through the atmosphere. The basic physics of balloon flight remains the same today with the latest Airship the British Airlander 10 which is currently the longest in the world. On Earth, helium-filled balloons fly in the lower stratosphere – between 10 kilometres and 33 kilometres, or roughly 30,000 to 110,000 feet above sea level.

But Earth’s atmosphere is quite different from our planetary neighbours: Venus is a crushing storm-world, and Mars has only a thin atmosphere of carbon dioxide. But the simplicity, range and efficiency of airships make them attractive options for engineers designing planetary ‘Aero-bots’ and manned vehicles.

In 1984 a joint mission between the Soviet space agency IKI and the French agency CNES launched two ‘VEGA’ probes on a journey to study Halley’s Comet, via an accelerating ‘slingshot’ encounter with Venus. Here the probes were to release the first extra-terrestrial weather balloons, designed by French chief scientist. The VEGA probes arrived at Venus on the 11th and 15th June 1985, and deployed the balloons on the planet’s night side, where they inflated to a diameter of almost 12 feet, or 3 and a half meters, at an altitude of 50 kilometres or 31 miles. The balloons returned data every 75 seconds as they were blown by hurricane-speed winds around one-third of Venus’s circumference in two days, proving that lighter-than-air probes can conduct wide-ranging surveys of even the most hostile atmospheres.

Despite this success, VEGA remains the only balloon probes to have ventured beyond Earth’s atmosphere. Although Jacques Blamont worked on a similar probe to visit Mars, cuts to Russian funding pushed the mission date back, until the project was dropped. However, at NASA’s Langley Research Centre, scientists are exploring the possibility of returning to Venus with airships. The mission, called the ‘High Altitude Venus Operational Concept’ or HAVOC, would use a helium-filled blimp, just as the VEGA probes did. The 31-meter, or 100-foot airship would deploy to hover above the clouds at around 90 kilometres, or 300,000 feet above the Venusian surface, powered by solar arrays. From here, they could provide support for landers, or return samples to Earth. Eventually, manned versions of HAVOC could provide support for a thirty-day mission at our closest planetary neighbour.

In the thin atmosphere of Mars, airships could go even further. As one of NASA’s ‘Innovative Advanced Concepts’, a design for a ‘Vacuum Airship’ has been approved for further research. Just as hydrogen or helium is less dense and therefore floats up in a denser atmosphere like on earth, a vacuum will do the same. The problem on earth is that the air pressure would crush a vacuum balloon, its structure would need to be very strong and therefore heavy, too heavy for the vacuum to lift it. However, on Mars with a much less dense atmosphere the structure would not require the same strength as on earth and therefore would be much lighter to allow the buoyancy of the vacuum to work.

According to the proposal, a rigid-bodied balloon could carry double the payload of a gas-filled airship and would pump air in and out of the envelope to maintain and control the degree of vacuum and therefore lift. The Vacuum Airship would have a large surface area for solar panels, which high above Martian storms, would also avoid many of the usual issues with dust and sand build-up.

Although it would be the largest man-made object in space other than the ISS, a Vacuum Airship could be extremely manoeuvrable  Using a method known as ‘CG’ or ‘Centre of Gravity vectoring’, the fore and aft sections of the airship could use different levels of vacuum to move vertically and navigate extreme terrains such as canyons and cliffs.

Like Breitling Orbiter and the VEGA balloons, Aero-bots on Mars could cover vast distances, catching a free ride on planetary weather systems. Navigating these winds, the NASA Vacuum Airship could lift ground-based rovers and transport them to other locations. Robotic labs including ‘Curiosity’ and NASA’s 2020 rover, which is designed to cover less than a few hundred meters per day, could be lifted between interesting locations on the surface. With the need to move an increasing amount of hardware around in preparation for manned missions in the 2030s, reusable airships on Mars might be our best option to do the heavy lifting.

This episode’s shirt was the Penny Dot Lane in Black and Grey by Madcap England and is available from Atomretro.com with worldwide shipping from here in the UK.

The TV camera’s Apollo left on the Moon

Why is Project HAARP so controversial?