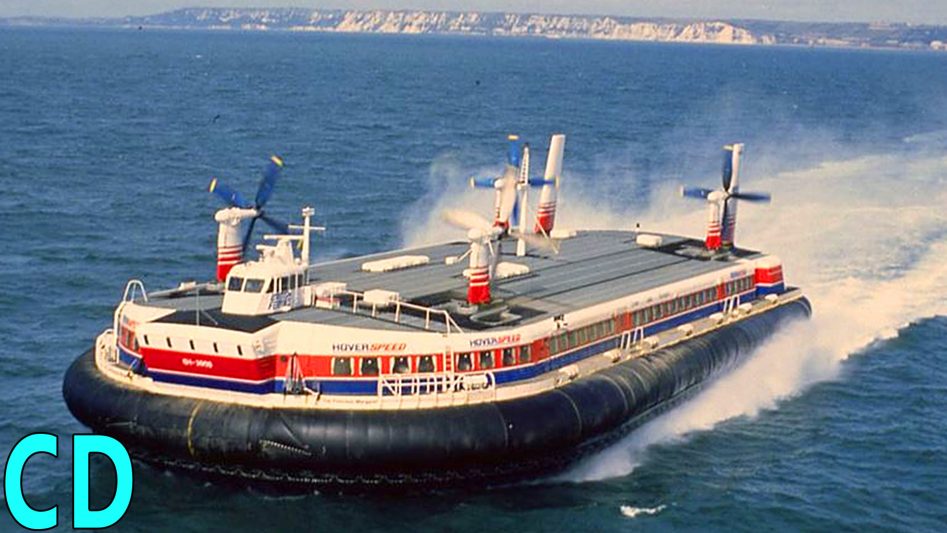 They were once known as the ‘Concorde of the Seas’: mighty flying boats that ferried their passengers with speed and style. Hovercraft were a symbol of national innovation and represented the future of transport in the 20th Century.

And yet, like the Concorde, the huge iconic ‘Mountbatten-class’ hovercraft that once traversed the 22-mile English Channel from England to France carrying hundreds or passengers and cars are no longer with us.

Today, the technology still attracts investment from the world’s militaries, industry and rescue services. These versatile machines have been used in the most inhospitable terrain, defying friction and coasting over obstacles that would be unpassable in other vehicles or ships.

Hovercraft are capable of travelling up fast-flowing rivers, over ice caps, on marshes or reclaimed land. Sixty years after their invention, they can be found working in the most remote corners of the world.

The name ‘Hovercraft’ was originally a trademark held by the British engineering company ‘Saunders-Roe’, which produced some of Britain’s largest and most successful rotor-propelled vehicles. To avoid the trademark, other manufacturers used the designation, ‘ACV’s’ or Air Cushioned Vehicles. Whatever name they go by, their distinctive shape is a result of a common principle: to trap a cushion of air beneath the craft, to reduce friction with the ground or waves and achieve high speeds.

The man credited with the invention of the hovercraft was the Cambridge-born engineer, Christopher Cockerell, who worked on radio technology during the second World War for the Marconi company. After leaving Marconi he bought a small boat hire business and immediately applied his engineering skill to explore ways to make his boats go faster.

High-speed watercraft were all over the news at the time, as Donald Campbell’s ‘Bluebird’ had broken the World Water Speed Record four times by 1958, hydroplaning on the calm lakes of Cumbria at 202mph, then 216, 225 and 239mph (or 385km/h). These speeds were possible as a result of ‘surface effects’ that bounced the ‘Bluebird’ on top of the water, like a skimming stone.

Cockerell had a different approach: by funnelling a ‘curtain’ of air around the perimeter of the boat’s underside, his craft could ride a cushion of trapped air. The unique advantage of this innovation was that the hovercraft was able to ‘float’ above the ground, even as it was travelling slowly or stopped.

Cockerell first tested the concept in his home workshop, channelling air from a vacuum cleaner between two concentric tin cans, then scaling up to test with a series of larger, radio-controlled models. In the Autumn of 1958, he sent the design for the world’s first prototype hovercraft to the factory at Saunders-Roe.

The first working hovercraft was the ‘Saunders-Roe Nautical One’, or SR-N1. This first prototype lacked the ‘skirt’ of later models, so as it zoomed across the water, it was often hidden behind a huge wall of spray. Regardless, the media were amazed by the new technology, and gave it the nickname, the ‘flying saucer’.

On 25th July 1959, fifty years to the day after Louis Blériot made the first crossing of the English Channel in a heavier-than-air plane, the SR-N1 set off from Calais, to make the first ever hovercraft crossing. As part of the three-man crew, Cockerell himself was on board, his job was to provide ‘dynamic ballast’ by moving himself around on the top of the hovercraft. With moderate swell and no following winds, the SR-N1 arrived at Dover in 2 hours and 3 minutes.

With this success, engineers went to work refining the design. As on the first channel crossing, the SR-N1 struggled in high winds or over variable slopes. Pilots also had to use considerable skill to compensate for poor steering response.

These issues were mitigated with the addition in 1961 of the hovercraft’s distinctive ‘skirt’, which gave greater clearance over the ground or waves. By more effectively containing the ‘cushion’ of air, the SR-N1 could now operate with twice its original weight. This improved carrying capacity also allowed a turbojet engine to be fitted to the aft of the SR-N1, increasing the maximum speed from 35 to 50 knots, 57mph or 92 km/h. A series of light hovercraft were developed in the next few years, including the SR.N5, which was licensed to be built by the US military, and saw service in the swamps and jungles of Vietnam.

The largest hovercraft built at the Saunders-Roe factory was the SR.N4, or ‘Mountbatten-class’, which was four times larger than any preceding hovercraft. The first SR-N4, called the ‘Princess Margaret’ was originally designed to carry 254 passengers and 30 cars. The four steerable propellers on the roof were the largest in the world, each 19 feet or 6.1 metres across. These were powered by Rolls-Royce Proteus turboprop engines, each of which used a ton of fuel per hour.

The SR.N4 was refitted and expanded twice, growing to a capacity of 60 cars and 418 passengers: as many as a 747 airliner. The main ferry route was between Dover and Boulogne, a 22-mile trip that took on average 35 minutes. However, when unloaded, the SR.N4 could go even faster, and the unofficial record for a cross-channel crossing was a blistering 15 minutes and 23 seconds. However, as the speed limit on the English Channel is 70mph, this was never officially acknowledged.

‘Princess Margaret’ was immortalised in the 1971 James Bond film Diamonds are Forever, in which Sean Connery embarked from Dover aboard the new ‘Mountbatten’ ferry. The Channel’s hovercraft service had its peak year in 198 when 3 million passengers made the crossing.

However, in October 2000 the route was closed, in part due to competition from the new Channel Tunnel rail service. By other accounts, it was the end of duty-free service in 1999 that made the hovercraft uneconomical. At this point, sales of tax-free products on board was making more profit than ticket receipts, and as spare parts ran out, the SR.N4 was retired.
A petition in 2016 to save an SR-N4, ‘The Princess Anne’ for display at the Hovercraft Museum near Portsmouth in the UK was successful, and the process of restoring one of the giant ‘Mountbatten’ hovercraft continues this year.

Christopher Cockerill envisioned a future where we would cross the Atlantic in huge, nuclear-powered hovercraft. However, this wasn’t to be. Rising oil prices in the 1970s meant that on many routes, more economical hydrofoils and catamarans offered better profit margins.

However, in rough terrain and inhospitable environments, the hovercraft still can’t be matched, and has been developed for the world’s elite amphibious military units.
The largest ever hovercraft is a thoroughly modern military vessel: the ‘Zubr-class’ air-cushioned landing craft. ‘Zubr’ is 57 metres or 187 feet long – 1 metre longer than the SR.N4 – but it can carry a much greater load, up to 555 tons. This means that the it can land three tanks or eight Armoured Personnel Carriers, with up to 375 troops onto a beach.

‘Zubr’ was designed in the 1980s, to match the capabilities of the American ‘LCAC’ military hovercraft. It comes equipped with an active system for hiding its magnetic field, a kind of ‘stealth mode’ for avoiding magnetic influence mines. In case of a nuclear or chemical strike, crew can seal off their living quarters to continue operations.

In 2009 China announced that they would purchase four ‘Zuba-class’ boats for $350 million each, and since then, have been granted a license to build further derivatives themselves. With Chinese interests in disputed territories in the South China Sea, huge hovercraft like ‘Zuba’ look set to remain front and centre on the world stage for years to come.

Thanks for watching and this episode’s shirt was the TRIP PAISLEY SURF RETRO by Madcap England and is available from Atomretro.com with worldwide shipping form here in the UK.

We also have the curious droid face book page, the link is in the channel page and I would like to thank all of our Patreon for their ongoing support and if you would like to support us please visit our Patreon page in the link….

Will NASA’s Asteroid mission save us in the future? – Project DART