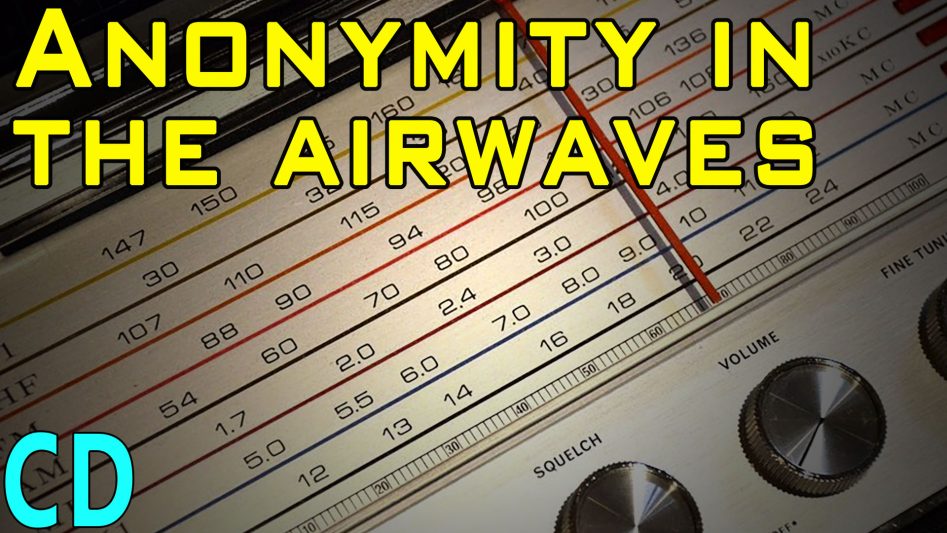 This is the sound of E03, also known as the “Lincolnshire Poacher” because of the use of a short piece of the aforementioned folk tune that introduced it. This is one of the best-known examples of a numbers station, something which reached its peak in the cold war but since its end and the rise of the internet has died down a lot but hasn’t gone away.

The “Lincolnshire Poacher” was believed to have been run by the British secret service and first broadcast from Bletchley Park before being transferred to Cyprus and Guam, continuing to broadcast up until 2008 sending encrypted messages in the shortwave radio band as blocks of spoken numbers to agents out in the field but we don’t know for sure because very few governments and no security services have ever admitted to using them.

So what is a numbers station and in this day and age of end to end internet encryption, why are they still in use and why are the existing ones as busy as ever?.

If you have ever listened to short wave radio you may have come across some weird broadcasts with no normal talking, just maybe a short tune or other repeated sounds and then repeated sets of numbers being spoken with synthesized voices, then music or sounds to end it before starting all over again. Other variations of this theme are stations that send the data as morse code or as just musical tones.

These are the numbers stations and they have been around since the second world war but their activity rose dramatically during the cold war. The languages spoken include English, German, Spanish, Russian, Slavic, Chinese & Korean and they are located around the world.

Initially, they were a mystery, they used powerful shortwave transmitters yet no one claimed to own them and unlike illegal pirate radio stations they weren’t shut down, they just went on and on and on, some for over 30 years, this makes it impossible to rule out government involvement.

By using the shortwave band, the range they can cover is from hundreds to thousands of kilometres as the signal bounces off the ionosphere and ground to propagate its way around the earth. The range increases dramatically a night as the suns effect on the ionosphere is removed as many radio listeners can attest to.

Over time these strange broadcasts attracted the attention of radio enthusiasts who started logging their broadcast frequencies, their schedules, types of transmissions, languages and sounds and music used.

This led to the equally strange names they were given like the aforementioned “Lincolnshire Poacher”, “Spanish Lady”, “Gongs or Chimes”, “Swedish Rhapsody” and  “The Bored Man”.

Although few governments have admitted to using them with the exception of Poland, Sweden and former Czechoslovakia, it’s pretty much an open secret that they are used to communicate with spies in the field.

A UK government official said to the Daily Telegraph that “People shouldn’t be mystified by them. They’re not, shall we say, for public consumption” which is about as close as we have gotten to an explanation.

In the US as recently as 2009, a foreign agent working for Cuba for 30 years was convicted and sentenced to life for espionage after receiving and decoding messages from a numbers station.

The thing about these stations is that they are far from hidden, anyone with a shortwave radio can tune into them and listen to the messages but only the person for whom the message is intended for can decrypt what they contain.

The system these spoken number stations use is called a One-Way Voice Link so the agent or spy only receives orders but never transmits back to the same station.

The spoken messages could only be decrypted with an OTP or One Time Pad, so called because the encryption key or password used to decrypt the message was written on a paper pad is only used once and then destroyed.

The beauty of this system is not only is it very simple to use, it requires nothing more than a pen, a piece of paper and a radio receiver, all everyday items that wouldn’t raise any suspicions. The only thing that could, is the One time Pad itself but they could be made very small and easily passed from person to person in the palm of your hand. Some suspected agents have been found with OTP’s hidden in things like a bar of soap or written on the back of a postage stamp.

Because of the way the message is encrypted and the use of the The One Time Pad, If correctly used it is considered perfectly secure against any form of cryptoanalysis, no matter how powerful the computer used and or how much time is taken, even a quantum computer would be unable to successfully reveal the intended message.

Because the encryption key is as long as the message and if its was truly randomly generated, such as based on quantum events like electrical noise instead of a computerised random number generator, any attempt to brute force decode the message will just produce every possible plaintext combination the encoded message. Even though the real message would be revealed by a brute force attack it would be just one of billions of others, all with equal probability of being the true message.

To be correctly used, it’s assumed that the random number key used on the OTP is truly random, the pad must securely be transferred to the agent it is intended for and never shared and once the message has been decoded the key that was used must be destroyed and never used again.

The KGB used flash paper for some of their OTPs which burned extremely quickly and left no ashes while others used rice paper or even chewing gum that could be eaten or chewed to destroy the evidence.

So whilst this might be perfectly secure under ideal conditions with today’s tech being far easier to use and still being highly secure, why are numbers stations still used. Nobody knows because no one will admit to using them, maybe they are sending dummy message to keep those listening on their toes and in a constant guessing game or maybe its to make those who are listening in think they have a large network of spies and agents even if they have none at all.

Sometimes the number stations are jammed by foreign powers, the North Korean foreign language service “Voice of Korea” began broadcasting on the E03 Lincolnshire Poacher’s old frequency in 2006, though E03 had moved to two other frequencies and was broadcasting from Cyprus and Guam by then it seems that jamming is a common occurrence in the world of number stations.

It’s not just governments that could use them, anyone with access to a powerful radio transmitter could do the same, from corporations to drug dealers, criminal gangs to terrorists. Anyone wanting to communicate over long distances with complete anonymity and avoid the modern digital world and the tracking and surveillance that accompanies it could do this very easily. You simply can’t track a handheld radio and therefore you have no idea where the agent could be operating.

It’s believed by some that governments keep number stations as a backup of last resort in the case of a countrywide shut down of the phone and internet services in foreign countries and that the very highest level of government communications use one time passwords which are still delivered in person to avoid any possible electronic tracking, though they are more likely to be on a USB key than a paper pad like the old days.