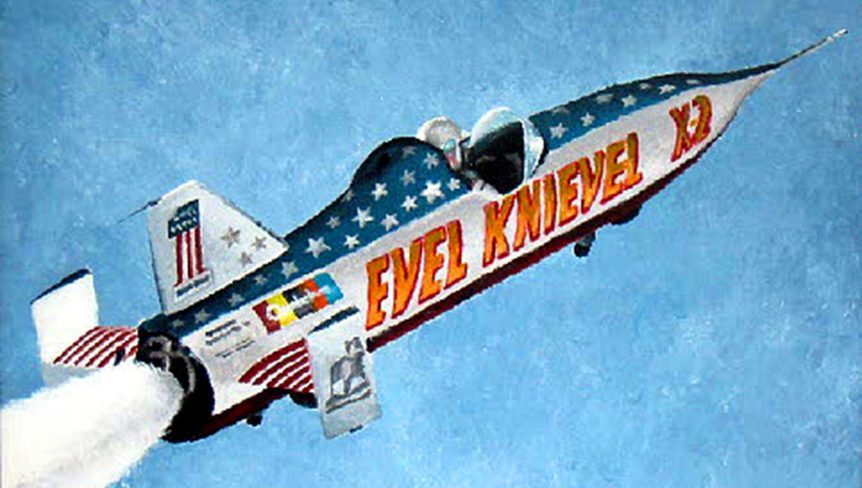 In the last year or so, its become almost commonplace to see SpaceX & Blue origin bringing rockets back after a launch for refurbishment and reuse. This has been the goal for billionaires Elon Musk and Jeff Bezos backed with NASA knowledge for well over a decade now.

But over 40 years ago another man had the same dream of a low-cost reusable rocket that very nearly came to fruition from the unlikely source of a two-car garage in an ordinary Californian suburb and could have made the world famous daredevil Evel Knievel the worlds first private astronaut.

That man was Bob Truax, and he was much more than a backyard rocket enthusiast. He had a track record, making a name for himself designing the Thor Missile which would become the basis for the ‘Delta’ launch family and the Polaris launch system for the US Navy. He was also named on the Patent No 3029,704 for the Stream Powered Rocket and Launcher of April 17th, 1962.

After leaving the military, he led a team at the American Rocketry firm Aerojet, developing the design for a monstrous heavy-lift booster called the ‘Sea Dragon’.
In 1966 Truax left Aerojet to set up his own company, where he continued his work on reusable rockets. To fund this research, he designed some blisteringly powerful propulsion systems, such as the ‘Thunderbolt’ steam rocket engine that created 5000lbs of thrust for Walt Arfons’ steam drag racer. It was this technology that led to him working with the daredevil Evel Knievel, who was planning to jump across the Snake River Canyon in Idaho, on a motorbike with a couple of flimsy wings and a fake rocket motor.

The feat seemed like a recipe for certain death, but Truax knew he could use a steam-powered rocket engine to launch Knievel at terrific speeds, high across the canyon.
A steam-powered rocket may seem like something that the Victorians would have thought of, but it is a proven technology that can produce a simple very powerful, yet very cost-effective reusable propulsion system.

Truax sold it to the daredevil on the ‘wow’ factor of the rocket, making Knievel the star-spangled rocket-man. And sure enough, on September 8th, 1974, the steam-powered ‘X-2 Sky-cycle’ launched exactly as planned and almost made it… except for the parachute, which deployed early on the ramp, sending Knievel to an embarrassing crash at the bottom of the canyon.

As soon as the Knievel was pulled from the wreck of the ‘X-2’, he asked Truax: “What else have you got up your sleeve?” Truax told Evel Knievel that if he could raise a million dollars, he could make him the world’s first private astronaut. The rocket would be called the ‘X-3’, a sort-of successor to the Sky-cycle and capable of launching an everyman astronaut above the ‘Karman line’, 62 miles (100 kilometres) above the Earth.

Knievel liked the idea and provided a ‘research grant’ of $3000, but soon had to pull out when he was caught up in an expensive lawsuit, for attacking his promoter with a baseball bat.

Truax needed a new backer, and he took his X-3 now nicknamed the ‘Volksrocket’ concept to the press. He appeared on Johnny Carson’s ‘The Tonight Show’, and placed two newspaper ads in the Wall Street Journal: one looking for financiers, which read ‘Wanted: Risky capital for risky project’, which not quite surprisingly went unanswered. The other was for would be astronauts read: “Man or Woman interested in becoming the world’s first private astronaut – must be in reasonably good health and able to produce $100,000 in spendable money”. That one had 3500 responses from all sorts of people, including an airline pilot, an elderly woman and a Buddy Holly impersonator.
For a long time, little in the way of funds came in but Truax pushed on with what he had: part-payments, small donations, and his own passion for the project.
Luckily, at the time, surplus rocket parts could be found at scrapyards in California, with the Vandenberg Air Force Base being close-by. One day as he was wandering around his favourite rocket part scrap yard, Truax spotted some Rocketdyne LR101 Vernier thruster engines, 7 of them in all, originally designed for making course correction on Atlas rockets. These had cost the government millions to develop and $70,000 each to produce, but only set him back just $25 apiece. Later he yoked 4 of them together to be the power behind the X-3.

Although the X-3 VolksRocket didn’t get off the ground with private money, in 1988, Truax Engineering got the big break they needed, winning a contract with the Naval Research Laboratory (NRL), for a reusable satellite launch system. To fit the NRL’s specifications, the ‘X-3’ was modified to take off from a sea-launch, like Truax’s previous designs for the ‘Sea Dragon’. Now with the designation ‘X-3A’ or SEALAR (‘Sea Launch and Recovery’), the ramped-up project meant that Truax could reassemble his team of engineers.
The rocket was scheduled to begin flight tests in 1996. But some among Truax’s team was less enthusiastic: helping the Navy with a new launch system seemed far from the democratic ambitions of the ‘Volksrocket’. In any case, the Navy funding was cut off just a month before the first scheduled launch.

Bob Truax died in 2010, age 93: but since his death, his ideas have become more widespread and relevant. His simple, saleable and reusable rocket designs were, as it turned out, well ahead of their time.
Bob’s son, Scott Truax, in particular, felt the call to ‘cure history’ by proving that the Sky-cycle worked. So, forty years after Evel Knievel’s ‘Snake River Canyon’ jump, he moved to Twin Falls, Idaho with a mission: to build and launch his father’s invention again.

Like the ‘X-2’, Scott Truax’s ‘Evel Spirit’, was made from the same surplus parts as the original X-2. The fuselage was made from a fuel-tank from a Grumman Albatross Seaplane, and an oxygen tank from a B-50 bomber. Inside, steam was pressurised to 500psi using a propane boiler from a steam cleaner, and as on the original, 10,000 horsepower of thrust was released with nothing more than the lid of a can of dog-food.

The moment of truth finally arrived on September 16th, 2016, when Stuntman Eddie Braun strapped into his seat, at the base of the 10-storey ramp. With a rush of steam, the ‘Evel Spirit’ soared into a clear blue sky. After twenty-six seconds of flight and forty-two years of history, the bullet-shaped shadow deployed its parachute and touched down in the fields on the other side.

As Knievel said in 1974, Bob Truax’s inventions are a tough act to follow. But the ‘Snake River Canyon’ is unlikely to be the last victory to rise from his blueprints.
Thanks for watching and I would like to thank Scott Truax for his invaluable help in suggesting and making of this video.

I would also like to say that this episodes shirt was the Zig Zag Trip by Madcap England and is available from AtomRetro.com with worldwide shipping from the UK.