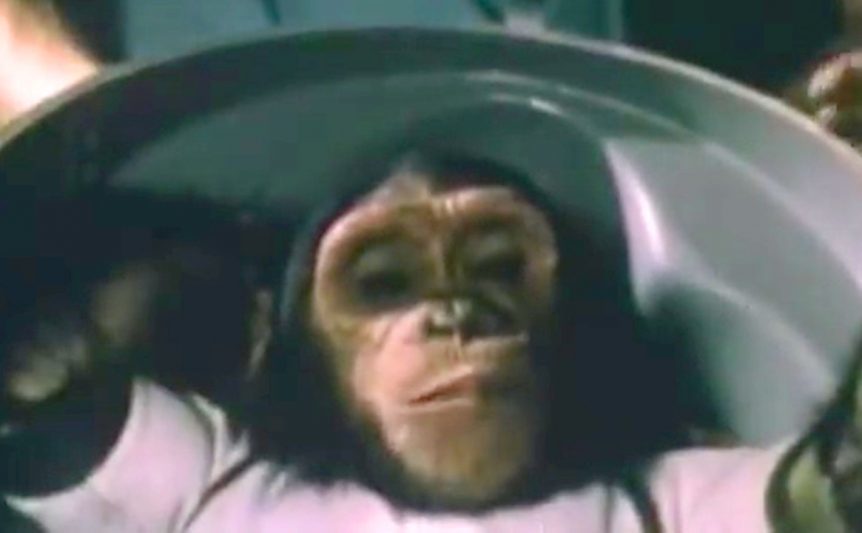 Everyone remembers Yuri Gagarin the first man in space but before his famous flight, there had been many more living space pioneers who didn’t really have any choice about being strapped into an experimental rocket. Animal Astronauts – The Space Race’s Unwitting Pioneers

The tidal wave of propaganda generated by Sputnik 1 had been unpredictable but it had been especially positive for Soviet leader Nikita Khrushchev. He summoned Sergei Korolev, boss of the Soviet space programme, and told him to make sure a second satellite was launched in time to mark the anniversary of the October Revolution of November 7th, 1917, giving Korolev just over 3 weeks to complete the task.

Despite the short notice, Korolev didn’t want to send up another bleeping sphere. He’d been developing his own ideas for some time. He wanted to score another first by putting the first living creature, aside from microbes, into orbit – and on October 12th, 8 days after Sputnik 1, the decision was made to send a dog.

Soviet scientist Boris Chertok later told how, in the rush to design and build Sputnik 2, all the rules that had been carefully drawn up by the missile development team were abandoned in favour of a “gambler’s enthusiasm.” He wrote: “The second simple satellite was produced without any preliminary design or plan. The draftsmen and designers moved into the workshops. Almost all the parts were manufactured using sketches. Assembly wasn’t so much according to documents as according to on-the-spot fitting.”

The satellite designed by Korolev’s Council of Chief Designers contained a radio transmission system that looked very similar to Sputnik 1. Above it was placed an instrument to study cosmic radiation, and below it was the cabin that would hold the dog.

That technology already existed because the Soviets had been sending dogs and other animals into the atmosphere since 1951, although those experiments had involved flights of only one or two hours. The Sputnik cabin was modified and included an air supply, gelatine food and a water supply. There also a light and a 100-line TV camera so scientists on the ground could watch the dog’s progress.

About 10 days before launch, military physician Vladimir Yazdovsky selected Laika to fly on Sputnik 2. The name Laika means “Barker” and it was the female mongrel’s second name, after first being called Kudryavka – “Little Curly.”
Laika and other dogs were strays picked up from the streets of Moscow and believed to be the best candidates because they had learned to endure the extreme cold and hunger.

Laika weighed 6kg and had been selected because she appeared to be the best behaved among the 10 candidates. A dog called Albina was selected as the backup, with a third dog, Muhka, used to test equipment on the ground.

Sputnik 2 had no way to return to earth, so it was only ever going to be a one way trip for Laika. The batteries providing life support were thought to be good for just six days, meaning that the Laika would die long before the end of the flight. It was later revealed that she died much earlier, probably due to overheating of her cabin. During the first three orbits, her vital signs appeared normal, although she’d been agitated during the launch procedure. By the fourth orbit, less than seven hours into the mission, the temperature had risen to 43 degrees Celsius (109 F) and by November 4 the only life sign was a heartbeat. By the third day of the mission, no life signs were reported.
Boris Chertok later admitted that everyone knew the flight was a “death sentence” for Laika. He said: “It was virtually impossible to create a reliable life support and thermal control system within such a short period of time. It was a complete triumph. None of us doubted that the Americans had been put to shame. Only the British Royal Society for the Prevention of Cruelty to Animals protested Laika’s martyrdom.” Some of the scientists had planned on euthanizing Laika by poisoning her food so she wouldn’t die in panic from the overheating but it seems that was not done.

In 1998, Oleg Gazenko, the scientist that selected and trained Laika, expressed his regret for her death and said the following “Work with animals is a source of suffering to all of us. We treat them like babies who cannot speak. The more time passes, the more I’m sorry about it. We shouldn’t have done it. We did not learn enough from the mission to justify the death of the dog”

Sputnik 2’s orbit decayed on April 14th, 1958, after completing 2570 orbits of the Earth with the debris including Laika’s remains impacting the Amazon region in South America. By that time, Sputnik 1 was long gone and the USA had placed their first satellite, Explorer 1 in orbit, with a flight that was to last 12 years.

Laika wasn’t the first animal in space, but she was the first animal to orbit Earth. On February 20th, 1947, the USA had sent up fruit flies aboard a captured German V-2 rockets in an early experiment into how radiation affects living beings. Two monkeys called Albert had been launched later. Albert, I died during a V-2 flight on June 11th, 1948, and Albert 2 died on impact when his V-2 returned to Earth on June 25th, 1949. Then on December 12th, Albert 4 also suffered no ill effects during a flight but died on impact after the parachute failed. It wasn’t until September 20th, 1951, that a monkey called Yorick and 11 mice came back alive from an American missile flight.

On July 22nd, 1951, the USSR had launched two dogs, Tsygan and Dezik, into space, and although they didn’t enter orbit, they were the first animals to be safely landed after a flight.

On May 28th, 1959, two monkeys, Miss Able, a rhesus monkey and Miss baker a squirrel monkey became the first two animals to be launched 300 miles 480 km into space by a Jupiter rocket and to be recovered alive by the United States.
Although They survived acceleration forces of 38g and 16 minutes in space, Miss Able died 4 days after from an adverse reaction to the anaesthetic during an operation to remove electrodes used in the flight.
Miss Baker went on to become quite famous at U.S. Space & Rocket Center in Huntsville, Alabama entertaining visitors to the museum and receiving hundreds of letters a day from school children. She lived until November 29th, 1984 becoming the oldest living squirrel monkey at the age of 27.

After Laika, the USSR sent up two more dogs, Belka and Strelka, on August 19th, 1960, along with a grey rabbit, 42 mice, 2 rats, 15 flasks of fruit flies and some plants. This was the first mission to place animals into orbit and bring them back alive. But Dezik died on a later flight, along with three other dogs among the 50 or so sent up by the Soviets.

On January 31th, 1961, a trained chimpanzee called Ham operated levers on a Project Mercury mission – becoming the first animal to interact with flight controls. Having proved that it was possible to operate a machine in space without dangerous delays caused by the environment, Ham paved the way for Alan Shepherd to become the first American in space aboard Freedom 7 on May 5th 1961.

Enos the chimp became the 3rd hominid after Yuri Gagarin and Gherman Titov to orbit the earth in November 1961 in what was to be a full-dress rehearsal for John Glenn’s first orbital mission in February of 1962.

In the same way, the Soviet animal experiments had enabled Yuri Gagarin to become the first human in space. Gagarin himself jokingly referred to it by saying: “I don’t know whether I’m the first man in space or the last dog in space”

Later, on September 14th, 1968, two tortoises and some worms and flies became the first living creatures to orbit the moon and return safely back to earth aboard the Soviet Zond 5.

Since the then, the kinds of animals sent into space has increased – as has the number of nations sending them there. The list includes frogs, rabbits, guinea pigs, fish, geckos, spiders, and dozens of other types of insects. In September 2007 a group of tardigrades, also known as Water Bears – eight-legged micro-animals known to be capable of going into a form of suspended animation were sent into space on the outside of a FOTON-M3 rocket for 10 days. Upon the arrival back on earth, 68% of them had survived the cold, irradiated vacuum of outer space.

The moral question of whether we should continue sending animals into space – or whether we should ever have done it in the first place – remains a hot topic. Some argue that, even in the early days of space travel, the only living things that should have been sent up were people who’d made the conscious decision to go, and knew the risks. Others point out that, while it may have been necessary to do it in the past, modern animal flights are nothing more than sideshows. Another point of view is that, as we look towards long-term plans of sending humans to Mars and beyond, we may once again have to rely on animals to take the risk for us.

In 2013 the UK’s Guardian newspaper ran a poll, asking the question, “Should we send animals into space?” 21% of responders said yes, while 79% said no. The topic has received renewed interest when, in 2015, University of Miami philosopher Mark Rowlands published a book in which he gathered recent research to claim that animals were capable of understanding right from wrong – and therefore could be as moral, or even more moral, than us.

Could We Live Without GPS?