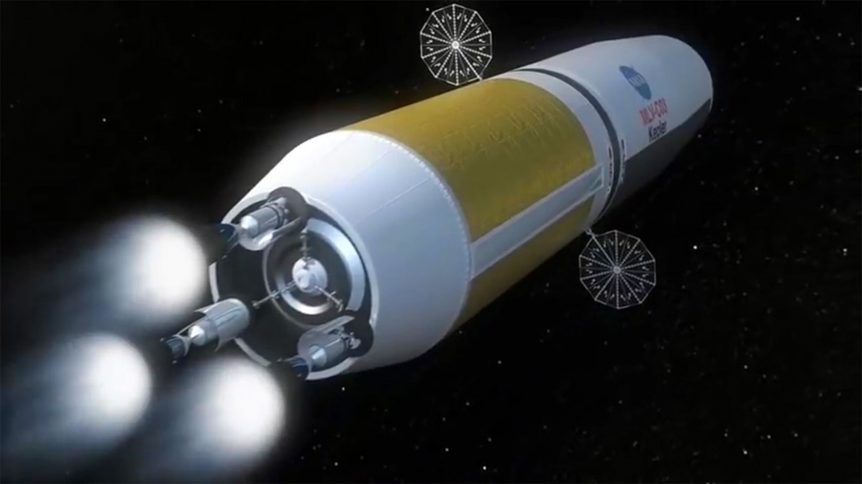 On the 6th Feb 2018 SpaceX’s first test launch of the Falcon 9 heavy, the most powerful rocket since the Saturn V, successfully launched the payload of Elon Musks own Cherry Red Telsa roadster, complete with the Starman mannequin, first into orbit and then on to what was meant to be Mars but now looks to be on  an elliptical orbit extending out to the asteroid belt between Mars and Jupiter.

Whilst the Falcon 9 heavy proved that it could launch a payload in to deep space, Starman and the roadsters journey itself is going to be a pretty leisurely one, just like everything we have launched into deep space, fine for mannequins, cars and robotic probes but not so good for humans.

With an average time of 9 months to get to Mars, the risk from radiation, weightlessness and psychological issues is high, not to mention the supplies they need to carry, even if they grow their own food and recycle their water.

But if you can reduce the time it takes to get there, all these things become much more manageable.

However, there is a technology using nuclear power that was developed for about 20 years from the 50’s to 70’s, originally by the US and the Soviets for Mars missions proposed in the 1970’s and 80’s but it was shelved after the demise of the missions themselves.

Now with our revived interest in Mars missions and trips to deep space, Nuclear powered rockets are back on the agenda as a way to cut transit time and carry greater payloads.

But we have to make a distinction here, the Nuclear rocket engines are only really for operation in space because they have much lower thrust to weight ratios compared to chemical rockets, so they will still be doing the heavy lifting into orbit but once there and away from the gravity of earth, nuclear engines can be much more efficient.

Now as powerful as chemical rockets are they have a problem, they need to carry not only the fuel but also the oxygen to allow it to burn which makes the rockets much heavier and reduces the available payload.

The first type of nuclear rocket, the Nuclear thermal one, it does away with the oxygen altogether and instead passes liquid hydrogen fuel through a nuclear reactor to heat it up to a super-heated gas. This hot gas is ejected from the engine in the same way as a chemical rocket and that’s where it creates its thrust.

The difference is that when a chemical rocket engine burns hydrogen and oxygen, the by-product which is water vapour is heavy and therefore at a given temperature it’s the velocity is lower and therefore the thrust is less.

Because a nuclear thermal engine doesn’t burn the hydrogen, it just heats it up, it is still pure hydrogen when it leaves the rocket engine and as Hydrogen is the lightest element, its exit velocity is the highest for a given temperature and therefore the thrust created is more.

A rockets efficiency or how well it makes use of the fuel is measured in seconds of specific impulse, sounds complicated but simply put, it means how long in seconds, one pound of propellent can delivery one pound of thrust.

Now, couple that with the fact you don’t need to carry a lot of heavy liquid oxygen with you, this means you can either go faster or carry larger payloads.

From the mid-1950s, this principle was studied extensively at the Atomic Energy Commission Laboratory at Los Alamos, New Mexico, through a program called ‘Project Rover’. By 1959, an experimental reactor called ‘Kiwi’ was ready for testing at Jackass Flats, Nevada and successfully ran at a power of 100 MW, then up to the full rating of 1000MW in 1962.

The program to turn ‘Kiwi’ into a working engine was called ‘Nuclear Engines for Rocket Vehicle Applications’ or ‘NERVA’. Again, the tests scored a series of successes: in 1967 the ‘NRX-A6’ engine fired successfully for an hour. As the tests continued, the engine run time was only limited by the supplies of liquid hydrogen at the test site.

Whilst these test engines proved the concept, there were still issues, the weight of the shielding to protect the crew and control electronics from the radiation made the engines very heavy. There was the problem of what would happen if a nuclear-engined rocket were to fail on the launch pad or were to fall back to earth from orbit and spread highly radioactive material over potentially highly populated areas and were also the issues of overheating  if the fuel which acted as a coolant ran out before the engine was shut down. But after years of testing they were deemed ready for use in space and NRX seemed to be on track to make it there by the late 1970s.

On the other side of the Iron Curtain, Soviet chief rocket designer Sergei Korolev expected his ‘N1’ super-heavy lift rocket to carry nuclear upper stages[1]3, giving the vehicle a formidable interplanetary capability. His team considered several options: either two nuclear upper stages on a 3-stage rocket, or a single nuclear stage on either a 2 or 3-stage vehicle.

With any of these options, the ‘N1’ upper stages would have to cluster large numbers of Nuclear Engines together: many more than on American designs. But a nuclear thermal upper stage was calculated to be able to deliver up to 50% more payload to Mars than a chemical transfer vehicle.

However, Nuclear Thermal Engines weren’t the only option on the table. Korolev favoured another way of harnessing atomic power. Pairing a nuclear reactor with Electric Ion engines. Although this system provided much less thrust, it was even more efficient and would provide a low thrust for very long periods of time instead of a quick burst like the Nuclear thermal ones.

In recent times, advances in solar panel design have made nuclear reactor powered ion engines less likely but for deep space missions beyond Saturn where there is not enough sunlight, nuclear becomes the only option.

Calculations showed that Ion drives would to be able to transport 70% more payload than chemical engines for a mission to Mars.

After the ‘N1’ quite literally fell by the wayside, Chief Designer Vladimir Chelomei was in pole position to design a rocket for a Soviet manned Mars mission. The enormous MK-700 was to be assembled in orbit, with multiple launches of the modular UR-700 rocket.

The MK-700 would make its interplanetary burn with a Nuclear Thermal Engine built by Valentin Glushko’s design bureau, called the ‘RD-0410’. The engine made it as far as testing, at the  Test Site in North-East Kazakhstan, demonstrating yet again Glushko’s mastery of rocket engine efficiency: the ‘RD-0410’ showed a capability of 910 seconds of specific impulse.

However, by 1972 and due to a loss of interest in space by the public and government in the US, funding for the NASA’s Mars Mission and ‘NERVA’ was cancelled by Congress. As the Space Shuttle returned focus to Low Earth Orbit where nuclear engines weren’t required and the Soviet priority was to match this capability, their research into Nuclear-powered spacecraft also stalled.

However, things picked up again with President Ronald Reagans Star Wars initiative in the late 1980’s. Project timber wind advanced the engines using a pebble bed reactor design and increased the specific impulse to nearly 1000 seconds, it also leads to the development of modern carbon composite materials. But it also faced technical issues that would have made difficult to use as a space engine system and funding was dropped.

More recently Russian engineers at the state energy corporation Rosatom are working on a form of Nuclear Electric Propulsion called ‘TEM’: an acronym that translates as ‘Transport and Energy Unit’. The name indicates a nuclear reactor capable of ‘bi-modal operation’: when not powering engines, it can be switched to a low-power mode to power living quarters and other onboard systems.

According to the designers, TEM has a goal of testing a ground-based engine this year and launching a prototype by 2025, if funding can be secured. The technology could, in theory, enable a journey from Earth to Mars in just 45 days.

NASA is also conducting new research into ‘Rapid Transit Technologies’, to mitigate the long-term effects of interplanetary space on the human body.

Like Russia, NASA sees Nuclear Thermal Propulsion as a solution here. The goal of current research is to reduce the cost and risk of the nuclear fuel by developing a suitable form of Low-Enriched Uranium (LEU), with a concentration of 3-4% Uranium-235, compared with the 90% concentration ‘weapons grade’ fuel in the earlier designs.

NASA’s research may well find its first use in a spacecraft like this: the ‘Copernicus’ Mars Transfer Vehicle (MTV). Conceived as part of the cancelled ‘Constellation’ program, ‘Copernicus-B’ is being considered for on-orbit assembly using NASA’s upcoming SLS (Block 2) launch system.

At one end of Copernicus, the ‘Orion’ spacecraft would dock with the ‘manned payload’ living space. Copernicus would then make its interplanetary journey using three nuclear thermal engines, each capable of producing 25,000lbs of thrust (110 kN).

The efficiency of the Nuclear Engines would enable a trip to Mars in 100 days – not quite as quickly as the proposed Russian mission, but still a significant improvement over traditional chemical engines. Copernicus would also be capable of bi-modal reactor operation.

How Prepared Are We For A Carrington Level Solar Storm?

How Do We Know What the Milky Way Really Looks Like?