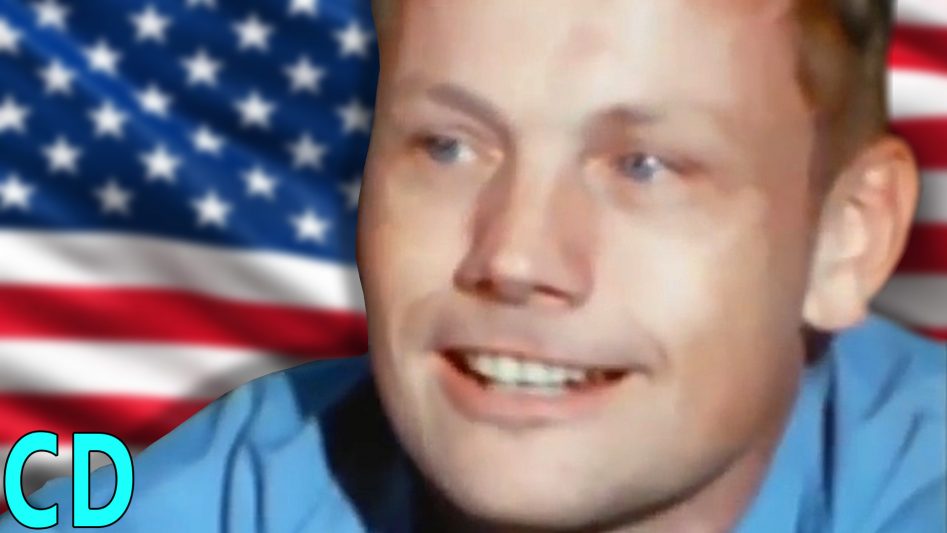 According to legend, the family name Armstrong was bestowed upon a Celtic clan after a leading member displayed an amazing feat of heroism in battle – using just one of his arms. If that’s true, it might suggest where, centuries later, pioneer pilot and astronaut Neil Armstrong got his sense of adventure from.

By the time of the first manned moon mission, Apollo 11 on July 22nd, 1969, he’d already cheated death at least seven times – all in vehicles provided to him by the American government.

Neil Alden Armstrong was born in Ohio on August 5, 1930, of Irish, Scottish and German stock. He got the flight bug when he attended the Cleveland Air Races at the age of 2, and he took to the air for the first time when he was 5. He got his student flight certificate at 16 and he made his first solo flight before he could even drive a car.

His first brush with death came in August 1951, when 21-year-old Armstrong was serving with the US Navy in the skies over North Korea. He’d first flown a Grumman F9F-2B Panther just five days earlier, renowned as the first US jet fighter that operated well off aircraft carriers. But his plane, number 125122, was hit by anti-aircraft fire while he undertook a low bombing run. He struck a pole that was sticking out of the ground and it took off a section of his right wing. Aiming to crash-land in the sea, he ejected just before losing control – but high winds blew his ejector seat back onto the shore. He was rescued unharmed and went on to fly nearly 80 more missions during the Korean War.

Armstrong left the Navy in August 1952 and studied for his Bachelor of Science and Master of Science degrees, achieving some of the highest marks ever noted. In 1955 he applied to join the High-Speed Flight Station at Edwards Air Base, operated by NACA – the National Advisory Committee for Aeronautics which later became NASA in 1958. He took off on his first experimental flight on his very first day at Edwards.

His next near-fatal experience came in March 1956, while he was co-piloting a Boeing B-29 Superfortress that was carrying a Douglas D-558-2 Skyrocket slung under its fuselage. During the flight number-four engine of the Superfortress suddenly shut down. Now if this occurred, it was normal practice to lock the propeller to stop it spinning out of control and prevent the risk of disintegration from over speed but on this occasion, it refused to lock.
The B-29 couldn’t land until the Skyrocket had been launched, they had a choice, speed up to release the rocket and risk damaging the plane or slow down to save the propeller. They chose to speed up and launch the rocket, just as the rocket launched the propeller exploded, launching its blades though the number 3 engine, on though the fuselage and in to the number 2 engine on the other side of the plane.

Amazingly with just a few control cables still connected to Armstrong’s side of the cockpit, The B-29 managed to limp back to base with just one of the four engines working.

Armstrong’s first journey in a rocket plane nearly ended in fatal disaster too. He took off in the Bell X-1B in August 1957, and all went well until he tried to land. As he touched down his front landing gear disintegrated and he had no option but to guide the plane into a controlled crash, once again he walked away uninjured.

The fearless Armstrong evaded death three more times in 1962. In April that year, he flew the North American X-15 hypersonic rocket plane to an altitude of 207,000 feet – the highest any human had reached. But a fault in the control system sent the X-15 into a nosedive, and he struggled to regain control because, at those altitudes, the aerodynamic design has almost no effect. Armstrong missed his landing strip as he overshot it at 2000 miles an hour, and finally got the X-15 onto the ground 40 miles from where he’d should have landed.

Four days later he was in yet trouble again – this time alongside fellow test-flight icon Chuck Yeager. The pair flew a Lockheed T-33 Shooting Star into a dry lake bed, with the aim of seeing whether it could be used as an emergency landing site. It couldn’t. Heavy rains meant that the lake bed wasn’t dry, and the plane got stuck in the mud. Armstrong and Yeager later tried to blame each other for the incident.

Next, on May 1962, came what’s become known as the Nellis Affair. Armstrong had to abort a landing at Edwards after trying to land his Lockheed F-104 Starfighter before the landing gear was fully deployed. As he turned the nose up, part of the plane hit the ground, causing severe damage and taking out his radio. Armstrong flew on to Nellis Air Force Base but with no radio to talk to the control tower, he warned them that he was in trouble by waggling his wings. As he landed the Starfighter, its damaged tall hook deployed and dragged a chain along the runway, causing further damage to both plane and landing area. Edwards air base sent Milt Thompson in another Starfighter to pick up his grounded colleague – but Thompson who had never flown the plane before and made a mess of the landing, causing more damage to the Nellis runway. When Bill Dana also made a hash of his landing in a T-33 as he came to collect his friends, the senior officers at Nellis decided to send all three home to Edwards by road.

By the time Armstrong joined the US space program, he’d already lived through at least six near-death experiences. However, he very nearly didn’t make into NASA because his application to join arrived after the deadline. Fortunately, a friend recognised his paperwork and slipped it into the received pile when no was looking – and so, in September 1962, Armstrong became the first civilian member of the Astronaut Corps.

The Gemini 8 mission of March 1966 was his first space mission and America’s twelfth manned space flight. As command pilot, he and pilot David Scott were to undertake the first-ever docking of two vehicles in space. But the mission ended in the first-ever critical failure of an American spacecraft – and it happened during radio blackout when the astronauts had no way of communicating with Mission Control.

After several hours of carefully lining up Gemini 8 with the Agena Target Vehicle, and finally making a connection, the combined spacecraft began spinning uncontrollably in a nose-about-tail yawing motion. Armstrong activated his Orbit Attitude and Maneuvering System or OAMS thrusters and brought the movement under control, only for it to start again almost immediately.

Following instructions to abort the docking attempt if anything went wrong, and concerned that the motion might cause an explosion in the Agena’s fuel tanks, Scott initiated the undock command while Armstrong used the Gemini thrusters to move away from the other vehicle. But that threw the Gemini into an end-over-end pitching movement, with the astronauts at risk of blacking out from the centrifugal forces as they endured one revolution per second, 60 rpm.

Armstrong regained control by using his RCS or Re-Entry Control System thrusters, after which they discovered that the number 8 OAMS thruster was refusing commands to shut down. Mission rules stated that, as soon as RCS thrusters had been fired, the flight should be aborted, so Armstrong began preparations for an emergency landing, which took place 600 miles south of Yokosuka, Japan, 10 hours and 41 minutes after takeoff.

On May 6th, 1968 Armstrong was training using the Lunar Landing Training Vehicle, also known as the flying bedstead in preparation for the moon landing in the lunar module because that would only work in the moons low gravity and couldn’t be used on earth. The LLTV was basically a jet engine in a framework with thrusters to control its attitude and flying it was described as like trying to balance a dinner plate on a broom handle. During the flight, one of the thrusters ran out of fuel and the LLTV lost control, Armstrong ejected at a height of just 200 feet before it crashed into a ball of flames. Having just 4 seconds on his full parachute he suffered just a cut lip on landing.

Of course, Armstrong’s most famous mission was as commander of Apollo 11 in July 1969 – and whilst he had to take control the Eagle lander due to an over loaded flight computer as it approached the surface of the Moon, and a broken ignition switch threatened to strand them on the moon before its return to Earth, he was never again in as much danger as he had been during the Gemini mission, or during more than 900 flights as a test pilot.

That’s a remarkable survival rate for a man whose family gained their name for an act of strength in an arm and through out his remarkable career it seems as though some of this ancestors were looking after him as he secured his place in history as the first human to step foot on the Moon.

So thanks for watching, I just like to say this episodes shirt was the Newport Waves by Madcap England and is available at AtomRetro.com with worldwide shipping from the UK.

Rolls-Royce ~ What else do they make other than luxury cars?

What if time did not exist ?