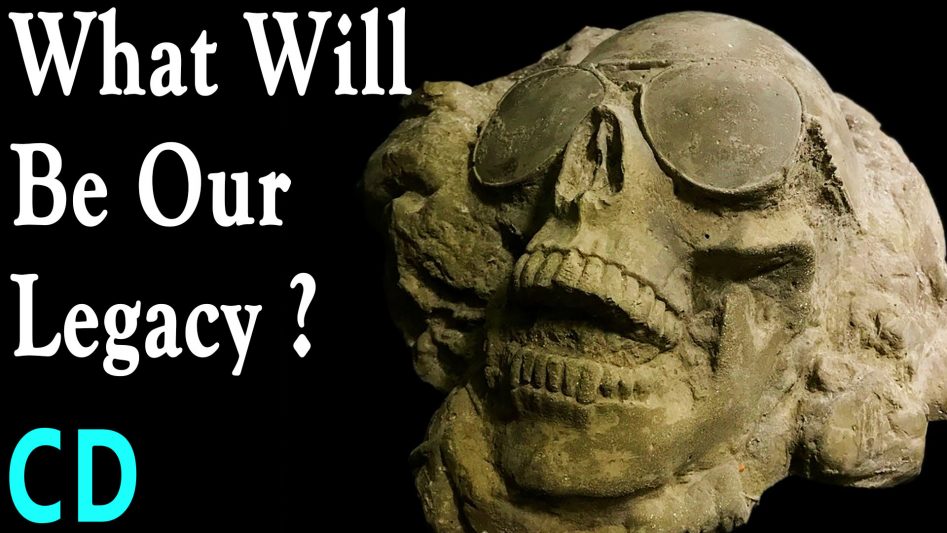 65 million years ago the dinosaurs died out, we only know they existed at all because of the tiny amount of their fossilized remains that have been found and they had endured for about 165 million years. We, modern humans, on the other hand, have existed for about only 50,000 years and its only the last few thousand of that that we have had an increasingly significant impact on the planet.

So if tomorrow, a similar type of extinction event were to wipe out the human race and an archaeologist in the deep future from what every species may have evolved by then was looking at the fossil record, 65 million years from now, what evidence would be to show that we had ever existed at all.

All though we like to think we are the culmination of life on earth and the only advanced species to have built civilizations, cities, spacecraft and discovered much about how our world and the universe works, we don’t actually know if a similarly intelligent species had existed before us.

If it took us around 6 million years to go from our last common ancestor with the chimpanzees to sending men to the moon, then what’s to say that a branch of the dinosaurs didn’t do the same some 71 million years ago and before they became extinct.

We assume that we are the first because we can not find any evidence to the contrary. We are a creative species, we have taken the natural resources and created a huge amount of stuff and changed the world we live in, from plastic ducks to skyscrapers, massive structures like dams and the great wall of china to the radioactive fallout from nuclear tests. If we have created these then surely an advanced civilization would have done something similar and there should be some evidence to show for it.

But the planet we live on is incredibly good at covering the tracks of the past. Just the wind, rain and ice can reduce massive mountain ranges to sand over millions of years. The land itself shifts, rises and falls, what was once at the bottom the sea can now be found at the tops of mountains, sea levels also rise and fall dramatically. The tectonic plates that make up the surface of the earth, above and below the waves are continuously moving, diving under one another and scrubbing clean any trace of what came before.

So it’s a bit of a miracle that we find any large remains of dinosaurs or other creatures considering what they have been through. But what we have to remember is that they existed for over 165 million years, 3300 times longer than modern humans have been around and the number of creatures that lived in that time frame alone, not including very small insect-sized ones must be in the trillions.

However, only a tiny number of those would have been in the right conditions to be quickly covered in sediment and then fossilized. Then millions of years later they happen to be exposed on the surface at just the right time before they are eroded away for us to find them.

The latest estimate is that the total number of modern humans to have ever existed over the 50,000 years we have been around is about 107 billion.

But 50,000 years is a very small slice of geological time and all of our 5000 years of recorded history would be a fraction of that, and the last 200 years or so since the industrial revolution, a tiny fraction of that again, maybe a razor-thin sliver of a darkened layer somewhere in the dozens of kilometers of limestone, siltstone, and shale of the future earth’s crust.

Depending on where we look there are gaps covering millions of years in the fossil records, if we were to slip into one of those, we too would be lost in time.

So what about the things we will leave behind, the cities with all the buildings, roads, skyscrapers, mines, hardened secure bunkers. Vast man-made concrete structures like dams. Over 65 million years, none of these would survive the effects of erosion or the coming ice ages and their crushing multi kilometre thick ice sheets and glaciers scrubbing the land below clean. Any great ecity would end up as a flat smudge in a layer of sedimentary rock.

Plastics, the bain of our lives now, would breakdown over a thousand years or so. Most metals corrode away in a few hundred years or less. Just look at the wreck of the titanic, 46,000 tons of steel and iron, 3700 meters deep in the Atlantic, probably one of the best places to be preserved in and yet, it will have been consumed by iron eating bacteria within a few hundred years. Only objects made from gold, silver, and platinum on board would survive intact for long enough if protected from erosion.

The radioactive fallout from the atomic tests in the 50’s and 60’s would have all but disappeared, the longest-lived isotope from these, iodine 129 has a half-life of 15.7 million years, so in 65 million years it will be pretty much gone.

The objects on the moon that we left behind, should anyone in the future be able to get would not be spared either. They would be hidden under the gradual accumulation of lunar dust and the weathering effects from the harsh solar radiation and micrometeorites. The same would happen to the rovers on mars too, only in a similar way to here on earth.

Even the ecological mess and climate change we are creating would be undone in time. The earth has been through much bigger changes and survived. The biggest as far as life is concerned was the Permian–Triassic extinction event about 252 million years ago where 96% of all marine life and 70% of land-based vertebrates became extinct and co2 levels were 7 times what they are now. The recovery took between 2 and 10 million years and saw the dinosaurs become the dominant species afterwards.

Some of the smaller items made we have from glass and some ceramics which are effectively manmade rocks, could survive if they were protected from erosion but it will be the unseen effects that will be the biggest giveaways that our technological civilization had ever existed, though you would need a mass spectrometer to find them.

This would be the huge spike in the amount of carbon in the atmosphere over the last 200 years and the biggest disruption of the nitrogen cycle for 2.5 billion years due to the use of artificial fertilizers and wastewater runoff.  Other things would be noticeable by their absence, namely the variety of other species, the current extinction rate is up to a thousand times higher than it would be without us around.

But other than this, in 65 million years, there will almost nothing left on earth to show for our civilization, our accumulated knowledge, our thoughts, ideas, art and culture other than a few fossilised bones, some gold & silver jewelry artifacts and maybe some human footprints beside a long since dried up river bed, if you were lucky enough to find them at all.

The irony is that the more ecologically and in harmony we live with nature now, the less of an impact we will have on the earth for anyone to find in the future. Equally there if was any previous technological earth-based civilization that had come to the same conclusion, then the less likely we are to find any trace of them.

However, we will have left behind a handful objects that will be in pristine condition and would tell any future earthlings a great deal about us even down to what we look and sound like if they could find them, because aren’t on earth.

They will be travelling in space, and in 65 million years they will be about 35 quadrillion kilometers away or about 3740 light years. The space probes Voyager 1 & 2, Pioneer 10 & 11 and New Horizons, far from the sun or probably any other star for that matter, will most likely outlast the Earth and the Sun, destined to wander the depths of space until they either crash into something or are picked up another intelligent species or maybe even our space-faring descendants if we make it that far.

Who knows maybe they will be some 3700 or so light-years behind the last lot of satellites launched from earth.