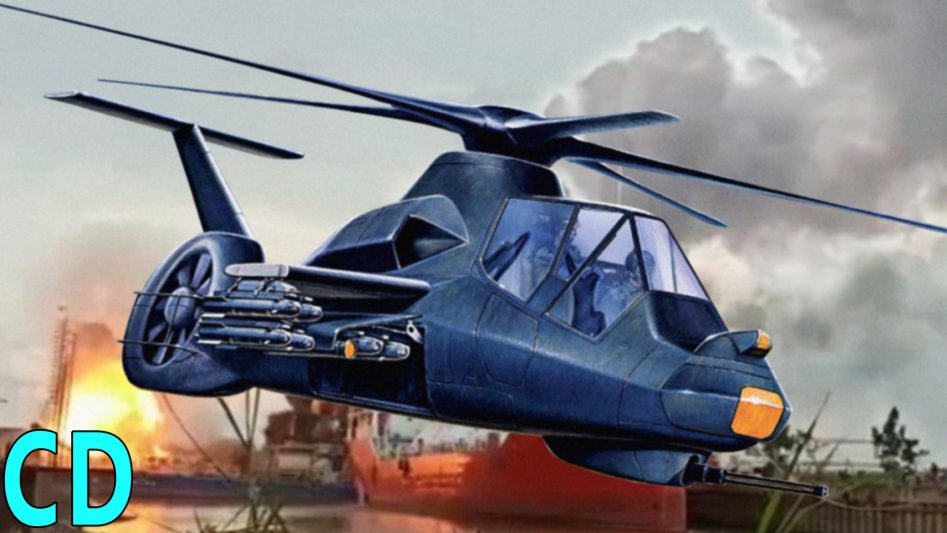 We’ve become accustomed to seeing stealth aircraft now for almost 30 years from the F117 night hawk to the B2 bomber to the F-35 but what about helicopters. They are an integral part of the military but the majority of them are hardly what you would call stealthy and ever since the advent of radar-guided and heat seeking missles they have been more vulnerable than their faster-fixed wing cousins. Although we’ve had hints of a black ops stealthy helicopter with the raid on bin Ladins compound in 2011, there isn’t the rotary equivalent of the F-35 in service.

But one was developed over 20 years ago and its mission was to do then for helicopters what the F-35 has done now for fixed-wing aircraft with stealth, sophisticated digital battlefield field electronics,  advanced networked sensors, high performance and firepower. Even though it was praised by the military, just two prototypes were ever built. This is the story of America’s first and so far last stealth helicopter, the Boeing–Sikorsky RAH-66 Comanche.

The story of the Comanche starts back in the early 1980’s with the US Army looking at replacing the OH-58 Kiowa and OH-6 Cayuse scout helicopters with something more survivable but also capable of attacking lightly defended targets.

Attack helicopters had come about during the Vietnam war when gun platforms had been fitted the Bell UH-1 Iroquois or the Huey to give them some form of protection when flying troops into battle but it soon became apparent that a dedicated platform would be required to make a true attack Helicopter.

The first attempt was the 1962 Bell Model 207 Sioux Scout, this introduced the key features of the modern attack helicopter, the tandem cockpit, chin-mounted gun and stub wings for weapons. Whilst the US Army liked it they thought it was too small and underpowered. Bell replied with the Model 209 AH-1 Cobra which used the same engine, transmission and rotor systems as the Huey.

The AH-1 Cobra was light, manoeuvrable and effective but lightly armoured and was susceptible to enemy fire which in the mid-1970s led to the development of the McDonnell Douglas Apache AH-64 as a replacement for the Cobra. This was more like an airborne tank, very well armoured with a wide array of weapons but this lacked the light manoeuvrability of the Corba.

By the early 80s the US Army was looking for a light attack and reconnaissance helicopter but one which would be heavily armoured and use stealth technology to defeat more sophisticated radar and heat-seeking missiles allowing to not only act as a forward scout for the more heavily armed Apaches but also attack smaller targets when it found them.

This resulted in the LHX or light helicopter experimental program but as a portent of things to come this took nearly a decade to come to a conclusion and award the contract to build the advanced armed reconnaissance and attack helicopter prototypes to Boeing-Sikorsky in 1991 with a development budget of $2.6 Billion. 1200 were to be built at a cost of $28 million per helicopter.

The program was going be the next generation helicopter and would introduce advanced new and untried design features. This would take the stealth knowledge gained from previous programs like the F-117 night hawk as well as introducing the concept of the digital battlefield using networked sensors to instantly transmit the location and strength of the enemy back to mobile headquarters directing the battle.

To do this many new technologies would have to be developed. The fuselage for example was a composite made up of 350 parts, a big reduction compared to the 6000+ parts for a normal metal helicopter of a similar size.

It used the flat faceted construction first seen on the F-117 to reflect radar signals away and was coated in radar and infra-red absorbent materials which reduced the Comanches radar cross-section to 360 times less than that of the Apache AH-64 and half that of a hellfire missile allowing it to get five times closer than an Apache before detection.

To help reduce the radar cross-section the wheels and weapons including the chin-mounted Gatling gun retracted into the body which also had the benefit of making it more aerodynamic and faster.

It was constructed with Kevlar and graphite armour that could withstand heavy machinegun fire from up to 23mm shells and it would also be more crash-resistant.

As helicopters operate close to the ground and at slower speeds than attack aircraft the first thing that most people know when one is approaching is the loud chop, chop, chop sound from the rotors. This is caused by the interaction of the airflows from the main rotor and the tail rotor. So on the Comanche, the tail rotor was an enclosed ducted fan to reduce airflow interaction and help reduce the sound, this was also tilted over to be less radar reflective.

The tail ducted fan was also very powerful and along with sophisticated control systems allowed the helicopter to change its angle of direction whilst it was travelling in a straight line. The effect of this was that it could fly sideways at speed or even backwards and aim its weapons without having to change course.

It also had the benefit in that the tail fan blades would be protected during low-level manoeuvres at night and when flying at treetop level, a time when it’s difficult for the pilot to see obstacles like tree branches, something that could damage normal tail rotors and bring down the helicopter. The composite tail fan blades could also withstand hits from 12.7mm rounds.

To further reduce the sound, the main rotor had five composite blades downward-canted which had less of a regular beating sound and more of a hum that was half the noise of a regular helicopter and could blend into the background better.

To defeat heat-seeking missiles the engine exhaust from the twin T800 turboshaft engines would be channelled along the tail to exit by the fan where it would be cooled by the fresh air from the fan.

The powerful engines and streamlined body made the Comanche very fast at 324km/h,  201mph.

The Comanche had extensive electronic countermeasures and fire control systems including a 2nd generation long-range Forward-Looking Infrared Sensor to spot targets which could then be illuminated with a laser to guide missiles.  It could be fitted with the longbow millimetre radar based on that of the Apache above the rotor to look over hill crests and trees.

Data from these could fed the automatic target identification and tracking system and forward it to others in the force a bit like the F-35 does now to provide near real-time intelligence. The crew had helmet-mounted displays and a night vision system and the separate crew cabins which were sealed again chemical and biological attack.

The triple-redundant fly-by-wire flight control electronics were fault-tolerant so that if part of it was damaged in an attack, backup systems could instantly over take over.

The first prototype started flying in 1996 with a second joining it in 1999 but as development and tests went by, more and more problems started to crop up. The sheer number of new systems and technologies being brought together in one aircraft meant that Boeing–Sikorsky were playing an increasing costly game of whack-a-mole to iron out problems which weren’t helped by the Army shifting the goalposts and adding new feature requests.

The Army want more weapons so stub wings were added with hard points for more missile but this then made it hundreds of kilos heavier and less aerodynamic but no one at the time had figured this out until it was loaded with weapons.

The Comanche was far more reliant on software for all its systems but this was proving to be buggy, sensors were unreliable and the radar absorbing body was susceptible to corrosion from rain. All of this,  the changing requirements and poor management slowed the project causing cost overuns which ended up tripling the development costs.

As the cost went up, budget cuts from the so-called peace dividend after the fall of the Soviet Union put more pressure on the program which was designed to fight a war against an enemy which no longer existed, so large numbers of reconnaissance helicopters were seen as no longer necessary.

Afghanistan and the war on terror moved the focus away from cold war era design goals even though other stealth and UAV programs were given more money but the stealth helicopter was seen as a niche project.

Over the lifetime of the program, the total number on order was gradually cut more and more which meant the unit cost of each went up and up which emboldened the project critics to push for even more cuts saying they were now too expensive.

In 2002 it was estimated that by 2008 the Comanche would be taking 40% of the army’s aviation budget, money that could be put to better use funding development and renovation of the existing helicopter fleet.

But in 2004 the Comanche project was abruptly cancelled by the Army, the development cost had risen to $6.5 billion and the cancellation fees to Boeing and Sikorski added another $500 million to the final bill.

So like many other forward-thinking programs, the RAH-66 Comanche ended up as another museum piece with both the prototypes now located at the US Army Aviation Museum at Fort Rucker, Alabama.

One of the feature requests was for the Comanche to control UAV reconnaissance drones which ironically helped hastened it’s cancellation because it was realized that they didn’t need the Comanche to act as sort a data middleman and as drone technology advanced they could be controlled more directly from regional headquarters.