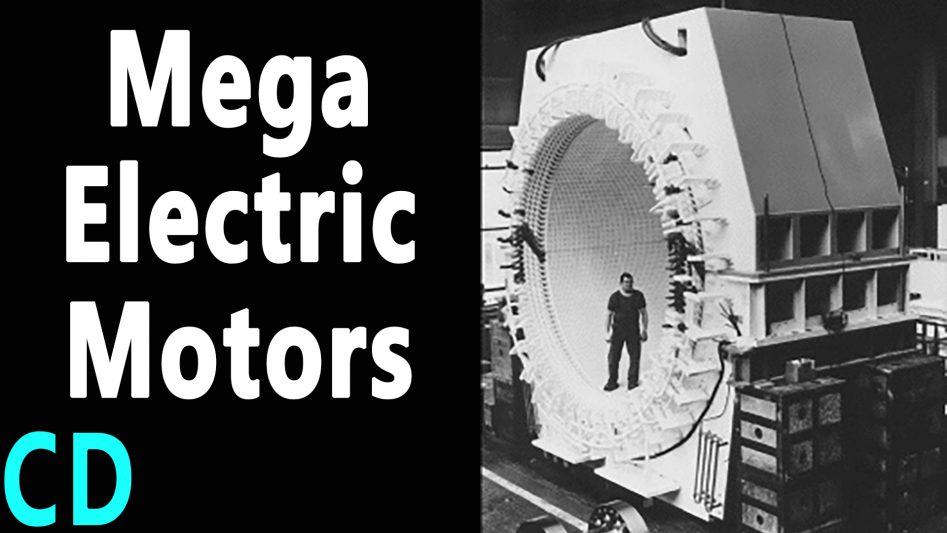 If you remember a short while back, we did a video on the world’s most powerful magnets, well I thought I would revisit the rabbit hole which it opened up and this time look at the most powerful electric motors which have benefited from the increased power of new magnets.

Something else I found out after the magnet video that the Sony Walkman was helped significantly by the use of samarium cobalt magnets in the lightweight headphones which gave them a much better bass response than would have been expected from what was a very small magnet and in turn greatly increased their popularity.

I also touched on the new powerful small motors in things like consumer drones and hand tools in that video so I thought in this video we look at the other end of the scale at motors which are used in cars and other much bigger forms of transport and one off projects.

We are living at a time when things are developing at an increasing rate and transport is now firmly are the forefront of this as we try to move away from fossil fuels to electricity.

But electric transport was one of the original forms predating petrol & diesel by over 50 years. The first true electric locomotive was built by the Scottish chemist Robert Davidson in 1842. The 7 ton Galvani used two direct-drive reluctance motors powered by 20 galvanic single use cells and could haul 6 tons at 6.5 kilometres per hour for 2.4 km.

The major problem was it was before rechargeable batteries had been invented and the cells required to power the loco were more expensive than the coal for steam locomotives and it burned through them at an equally fast pace making it a technological and economic dead end at the time.

But the reluctance motor was a different and more interesting story. This type of motor differed from a traditional electric motor with windings on the rotor and magnets around the outside by having the reverse, windings around the outside and a rotor with soft iron cores that acted as temporary magnets and relying on magnetic reluctance to induce the magnetic field into the rotor.

By turning on and off alternating coils and creating a rotating magnetic field, the rotor becomes a multipole temporary magnet, the poles of which are attracted and replied by the magnetic fields created by the coils.

However, because in the early days the control of the coils was primitive, reluctance motors suffered from vibration and noise due to torque ripple at low speed, that’s the difference between the maximum and minimum torque during one revolution so their use was limited. But they were more efficient than induction motors which lose more energy through heat as the rotors heat up.

It’s only with the introduction of computer-based micro-controllers in the last 20 years or so that can monitor the speed and position of the rotor and adjust the rotating magnetic field accordingly so that they never go out of synchronisation. This synchronised control can also react to sudden increases in load and due to their increased torque which is up 15% more than an induction motor, reluctance motors are now taking over from inductance motors as a new more powerful soloution for the 21st century and the one place they are increasingly being used is in electric cars.

With the release of the Model 3, Tesla has been moving from induction motors to SRM’s or synchronous reluctance motors and we are seeing some amazing performance figures from cars like Tesla Plaid offering supercar performance from a four-seat saloon car at a fraction of the price using these new more powerful motors.

Now while telsa have been resurrecting ancient motor technology, Koenigsegg has also gone back to one of the first motor designs with their new Quark Motor which is an Axeil flux motor also known as the pancake motor. Axeil flux motors are a very old motor design but it has only been in recent times with the availability of high power permanent magnets that its has been able to be used for high power applications.

These motors have the rotor and the sator parallel to each other rather than cylindrical style which have one inside the other. This type of low profile motor is used in devices like hard drives and  computer cooling fans etc with coils mounted directly on to printed circuit boards and magnets fixed to the rotor.

Koenigsegg has used lots of exotic materials to keep the weight down and the strength up. Because the torque generated is created by the magnetic field acting on the magnets, the way the magnets are fixed to the rotor is key. They must be strong enough so that they don’t get ripped off by the shearing force of the torque and they don’t fly off at high speed due to centripetal force, so the rotor is made from hollow carbon fibre, the same technology they developed for making super light yet strong road wheels.

The upshot of all this is they have created a motor that is not only very small and weighs just 28kg but can generate upto 335hp and 443 lb-ft of torque… but for only 20 second bursts, after which it drops to 134 hp and 184 lb-ft of torque, presumably to prevent it from overheating.

As Koenigsegg have stated, this flat pancake style motor will also suit other forms of transport too such as electric aircraft, boats and Vertical take off and landing. The motor has not only the power but because it can rev to high rpm there is no need for a gearbox thus reducing the weight even more and taking up less space.

Koenigsegg say they are looking at supplying it to other industry sectors and have even made a combined dual motor and inverter drive unit for Electric Vehicles called the Terrier. This can deliver upto 670hp and 811 lb-ft of torque and weighs in at 84kg and could be bolted directly in to a subframe or chassis.

However, when it comes to real high power motors, ship engines are the biggest and are on a scale that makes normal combustion or electric motors look tiny by comparison.

The biggest internal combustion ship engine is the 14-cylinder Wärtsilä RT-flex96C which is a 2 stroke diesel capable of producing 107,390 hp and 5,608,310 lb-ft of torque.

To keep this running it uses 250 tons of diesel per day and hums along at a leisurely 102 rpm.

So you would think that there aren’t any electric motors that can get near that but you would be wrong.

The Royal Navy’s HMS Queen Elizabeth class carriers are the second largest in the world after the US Nimitz class and are the first fully electrically powered carriers built. They are powered by four General Electric 20 MW Advanced Induction Motors which is equivalent to 27,000 hp each. Two of these motors drive each of the two propeller shafts, giving a total power output of 108,000hp

Each of the tandem motors weighs 110 tones and because they are much smaller than one large ship engine they can be fitted into smaller independent compartments freeing up space for other uses and distributing the propulsion power, so if one were to be incapacitated the ship can still manoeuvre.

One of the reasons why they went for a fully electric design was because it would be cheaper than nuclear and the fuel-saving compared to a traditional diesel like the Wärtsilä RT-flex96C. It’s reckoned that the 65,000-ton carrier will use about the same as a 22,000-ton vessel over its lifetime.

As more electric ships come online, new more powerful electric motors are being developed and one of the most powerful so far has been developed by Northrop Grumman for the US Navy.

This uses High-Temperature Superconducting coils that make it not only more powerful but much smaller. The HTS Motor is a 36.5 MW equivalent to 49,000 hp and yet it weighs about 75 tons, the amount of torque it generates is 2.13 millon lb-ft.

So comparing it to the Wärtsilä, two of these coming in at 150 tons and less than the size of two of its pistons would provide 91% of the horsepower and 76% of the torque.

Of course creating over 70MW of electrical power to drive the motors is another matter that would have easily been solved by going nuclear but that was not an option the royal navy wanted to take.

On the HMS Queen Elizabeth and US Zumwalt class destroyers, this is generated by two Rolls Royce MT30 gas turbine generators based on the Rolls-Royce Trent 800 aero engine, the engine for the Boeing 777. These can supply 70Mw of power and this is backed up by four smaller Wärtsilä diesel electric generators providing another 40Mw to give a total of 110Mw.

The motor here is used in NASA’s National Transonic Facility to power its Transonic wind tunnel and is the world’s largest adjustable speed drive system that powers a fan to produce wind conditions of upto Mach 1.2 that’s been used to test the Boeing 777, 767, space shuttle and many more though most of these were tested when it had the old 60MW motor fitted but that could only run at full power for 10 minutes at a time, hence the upgrade in 1997.

The wind tunnel is a closed-loop high pressure system with the test area measuring 2.5m high by 2.5m wide. It uses nitrogen gas to cool the air to replicate flight dynamics on a small scale and unlike a full-size wind tunnel, this can adjust the airflow to match any model sizes down to 1/50th scale.

It uses an AC synchronous motor rated at 101 Mw or 135,000hp with a variable speed from 300 to 600rpm. The motor itself measures 5.4m long × 6m wide × 7m high,  excluding coolers and other accessories, weighs 360 tons and is considerably larger than the test area itself.

The motor, custom four-winding transformer, harmonic filter and associated control system was built by ABB in Switzerland before being shipped to the US and installed in NASA’s facility at Hampton, Virginia.

So apart from some hydro-electric plants that use their generators in reverse to pump water back up hill, so technically they aren’t dedicated motors, that are about as big as they get… at the moment and unless you of something I’ve missed out on.