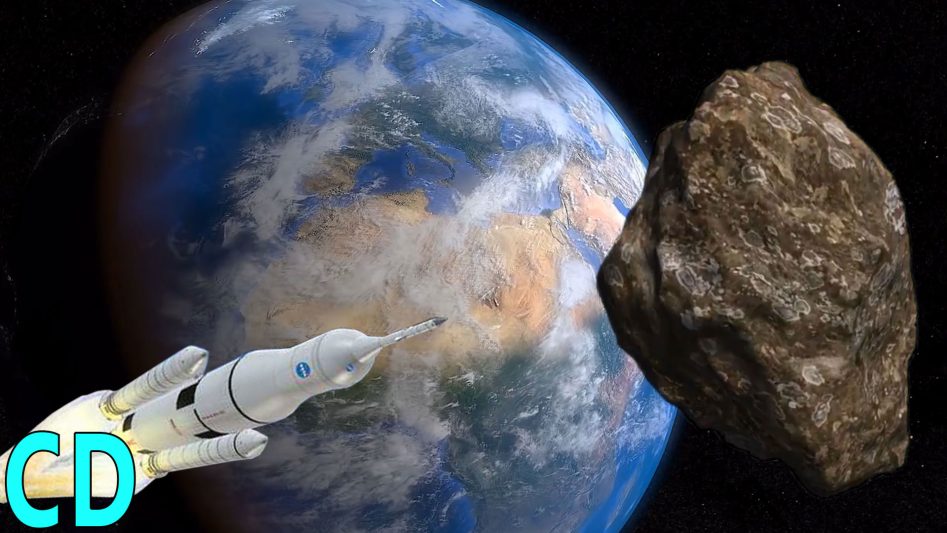 On average the earth is hit once every two weeks by an asteroid measuring a couple meters or so across, in fact the earth is being hit all the time by small meteorites, luckily most of these small objects burn up in the earth’s atmosphere appearing to us as shooting stars.

However, as it was shown by the Chelyabinsk asteroid in 2013, there are larger objects out there that are big enough to pose a serious threat to those in the vicinity of an impact but small enough to go unnoticed until they actually hit the earth.

Then there are the monster planetoids as much as a several hundred kilometres across that if they struck the earth would sterilize it of all life.

Luckily these massive objects are very few and far between and well away from us, the biggest risk comes from ones up to several kilometres across.

But now for the first time in the earth’s history, we humans have reached the stage where we are now able to do something to protect ourselves, which is just as well because next big asteroid could have our name on it.

Between 2000 and 2013 there were 25 asteroid impacts with blast forces ranging from 1 kiloton to 600 kilotons. 8 of those equal to or greater than the Hiroshima atom bomb which was equivalent to 16 kilotons of TNT. Of these 25 asteroids, only 1 was detected just 19 hours before it hit the earth.

Its estimated that there some 500,000 asteroids in our solar system classified as Near Earth Objects on potentially earth crossing orbits which if they struck the earth would have a blast equal to or greater than 10 megatons of TNT.

On October 31st 2015 an asteroid about 600m across passed 486,000 km or about 302,000 miles from earth. That might seem like a long way from us but in astronomical terms its close. More worrying was that for such a large object, it was only discovered about 3 weeks before it was due to pass by.

These potentially Hostile objects or PHO’s don’t need to 100’s of meters in size to cause a major problem. The Chelyabinsk asteroid which came to us completely out of the blue was only about 20 meters across. It exploded at a height of 100,000 feet with the force of 500,000 tons of TNT, about 29 times that of the Hiroshima bomb. The shock wave damaged 7200 building injured about 1500 people mostly from flying glass and debris.

In 1908, its believed that either a comet fragment about 170 meters across or an asteroid of about 50 meters across exploded between 15,000 and 30,000 feet above a sparsely populated area of Siberia near the Tunguska river with the force of 10-15 megatons of TNT, about 1000 times that of the Hiroshima bomb. That was enough to flatten 80 million trees over an area twice the size of New York City.

As the saying goes “forewarned is forearmed“, the more time we have from detecting a possible threat, to it potentially hitting us, the better our chances are.  Detection is key here and it is also one of the more difficult things to do.

Even the larger asteroids are difficult to find. They formed in the inner solar system from the same rocks and dust that created the inner planets and many are believed to be effectively rock piles loosely held together by gravity. The problem with most of these objects is that you are looking for a cold dark lump of rock against the cold black background of space.

Up until recently the only way to find these large objects was with a telescope and clear sky with both professionals using robotic telescopes and amateurs looking for anomalies in the night sky that could be a new unknown asteroid.

The 140m size is chosen because they would be the equivalent of a 100 megaton explosion if it were to hit earth and the 40m ones are the 10 Megaton city killers like the Tunguska object.

In 2012 a space telescope called “Sentinel” was proposed by the B612 foundation, a group dedicated to protecting the earth from asteroid and other near earth object impacts.

Sentinel is designed primarily to look for objects larger than 140 meters and is designed to find and catalogue 90% of the large asteroids within its mission life of 6 to 10 years.

In an orbit between earth and the sun and with its camera facing away from the sun it would be able to detect the tiny amount heat or infrared energy reflected from the sun by asteroids compared to the cold of the background space.

Sentinel was due to be launched in 2016 but due to delays in funding it has been delayed to 2019.

In 2013 NASA announced that it would recommission the Wide-field Infra-red Survey Explorer or (WISE) space telescope to look for near earth objects. NASA also has plans for its own space telescope specifically for asteroid detection called NEOCam and IF the project gets the go ahead, because it has to compete for funding with other projects, it would be ready to launch by the end of 2021.

Most of the near earth objects have orbits that can anything from several years to decades, this can give us plenty of time providing they can be detected early enough.

But what could we do if we did find an object on a collision course with us. There are basically two options, deflection or fragmentation.

Deflection only really works if the object is a long way from earth and by that we mean 10 years or more away. We could send a satellite to intercept it, then by either landing on it and pushing with rockets or even crash in to it at high speed with a kinetic impactor or basically a heavy space craft.

The theory is that even a tiny change in the objects course at these huge distances from us could alter its course away from the earth.

The second method which many people would have seen in films like Armageddon and Deep Impact is to blow it up with a nuclear weapon.

Although in real life blowing up a large asteroid could almost as dangerous as leaving it intact because it could result in 1000’s city killer sized rocks or bigger, raining down across a large area of the planet.

Any piece of rock larger than about 35 meters could be capable of making it through the atmosphere intact to the surface were the destruction would be much greater than if it exploded in the air.

The favoured way to use nuclear devices is the stand-off method. The plan would be to explode one or more nuclear devices at a standoff distance of 30 meters or so from the asteroids surface. Not so close as to break it up but close enough to vaporize the surface to a shallow depth. This would create jets of material as the surface vaporizes which then act like thrusters pushing it to a different trajectory.  Again this would only work for object that was detected well ahead of time and a long way from earth.

A NASA study in 2007 concluded using nuclear devices to push an object off course would be 10 to 100 times more effective than the Kinetic impactor or push method. This was been backed up by modelling such an event on the Cielo supercomputer at Los Alamos Laboratory in 2011.

However, If an extinction level object greater than 1km across or a comet where to be found on a collision course but with only a few month’s notice then fragmentation may be really the only option left because we would not have the time to gradually push it off course.

We would then have to just hope that the explosion would be large enough to either vaporize most of the object and scatter the remainders enough to either miss us be small enough to burn up in the atmosphere if they did hit us.

In 1995, Edward Teller one of the original designers of the atom bomb suggested a collaboration of ex cold war nuclear bomb designers from the US and Russia to create of a 1 Gigaton nuclear device that could be mounted on a high powered space rocket.

Such a device would be 20 times more powerful than the largest nuclear weapon ever exploded, the 50 megaton Tsar Bomba created by the Soviet Union in 1961 and would be able to vaporize a 1Km asteroid or deflect ones with diameters of 10km or more.

The problem we have with any of these and other theoretical methods is that for the immediate future, they are just that, theories.

If a large asteroid were to be discovered tomorrow and just a couple months away from earth, we currently have no really effective way of dealing with it.  Just getting a launch mission prepared takes months let alone what we would put on it.

The Chelyabinsk incident has focused the issues surrounding the threat from extraterrestrial objects but our Earth IS in an interplanetary shooting gallery and it IS only a matter of time before a large asteroid is bearing down on us.

Hopefully before then we might have some actionable plan to save us from going the same way as the dinosaurs, when the last big object hit the earth.

How China is taking on the world in space

Hubble Trouble – How did the Space Telescope Mirror End Up Flawed ?