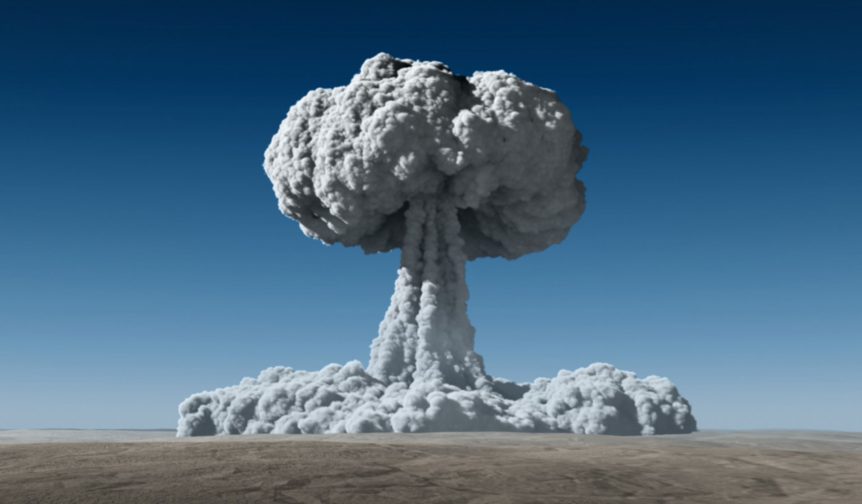 We are all products of the decisions that we and others make every single day of our lives but some decisions have repercussions that are sometimes so far reaching that they can affect everybody on the planet.

In this video, we picked out five decisions that changed the world.

The Cuban missile crisis was probably the closest we have come to a nuclear conflict and many thank Kennedy for facing down the Soviets by blockading Cuba and turning back the Soviet supply ships.

But the more important decision was for Kennedy to ignore the advice from General Curtis LeMay the Air Force chief of staff.

General Curtis LeMay clashed with Kennedy and said that the blockade was a weak political action that would lead to war. He suggested that he should be allowed to bomb the Cuban missile sites and that would force Moscow to back down instead of face a nuclear shoot out.

What he and others in the US didn’t know at the time was that the Soviet field commanders in Cuba had been given authority to launch nuclear weapons independently of Moscow, the only time such power had been delegated by the Soviet leadership.

There were at least 20 nuclear warheads, each with a 1 megaton capability and medium-range missiles that could reach as far as Washington as well as 9 tactical nuclear missiles all stationed on Cuba at the time.

This meant that if LeMay had gotten is way and attacked the missile sites, there was a very high probability that the soviet commanders would have launched a nuclear attack on the US mainland before Moscow could have reacted.

This would have led to millions of US casualties and the ensuing retaliation by the US Strategic Air Command, again lead by LeMay would have killed up wards of 100 million soviets.

Kennedy’s hunch was right and the blockade worked and after secretly removing US missiles from Turkey and Italy the Soviets backed down and removed their missiles from Cuba.

If you celebrate Christmas or enjoy having Sunday off work, then you’ve got to thank one man almost 1700 years ago for his decision to adopt a minor religion that had been persecuted for over 200 years and it’s not Jesus Christ.

That man was the Roman Emperor Constantine and his religious conversion took place during the civil war when the roman empire was effectively in two parts with Constantine coming from Britain in the west and Maxentius ruling the east and holding Rome.

Christianity back then was a banned religion because amongst other things, Christians refused to participate in the Imperial cult. This cult regarded the roman emperors and members of their families as gods, anyone who refused to acknowledge this was committing treason which was punishable by death.

In 312AD Constantine was about to fight a key battle in the war and prayed for divine help. Afterwards he claimed to see a burning cross in the sky. Later that night he dreamt that god told him use the sign of the cross on his soldiers shields and on the standard to safeguard all his battles.  Constantine defeated Maxentius at the battle of Milvian Bridge and became the western Emperor and continued wear the cross to safeguard him against his enemies.

Constantine became a Christian and became a great patron for Christianly. Shortly after he became emperor he issued of the “Edict of Milan” which allowed Christians to freely practice their faith and went on it to overturn hundreds of years of Roman pagan beliefs.

He combined some of the old pagen worship rituals with the Christian ones. He made December 25th , which was the birthday of the pagan sun god into the celebration of Christs birth and thus it became Christmas day. He also made Sunday an official roman holiday so people could attend church, he abolished the taxes on Christian churches and funded Christian leaders and new church buildings.

By 394AD Christianity was the official religion of the Roman Empire and Roman version of Christianity went on to became the hugely powerful Roman Catholic Church which dominated much of Europe for well over 1000 years before spreading around the world.

It’s difficult to say how the world would look if Constantine hadn’t become a Christian but one thing is for certain, without the monolithic power block of the Catholic church it would be a very different to how it is today.

Sometimes the actions of a single man’s conscience can make a decision that can the affect the future of a whole nation.

On September 11th 1777, 12,500 British troops had landed at the northern end of Chesapeake Bay and headed through Pennsylvania toward the patriot capital of Philadelphia.

Guarding their flank and hiding in the woods were a detachment of green-clad British marksmen on the lookout for American forces led by General George Washington.

The marksmen’s commanding officer was Captain Patrick Ferguson, a 33-year-old Scotsman who was said to be the finest shot in the British army.

Ferguson and three of his men spotted a cavalry officer dressed in the colorful uniform of a European hussar followed by a senior American officer wearing a high cocked hat.

They crept forward with the intention of picking off the officers but then Ferguson had a sudden change of heart and felt disgust at the thought of shooting the officers in the back as they rode by, which would have been dishonorable in the 18th century. Instead, Ferguson shouted at the men to dismount, they turned to see him then rode off.

A few days later Ferguson was shot in the arm and seriously wounded, it was at this point that he  learned that the American officer he let ride off was most probably General George Washington.

Whist Washington won the war he was repeated outmaneuvered by the British. Had Ferguson shot Washington that day it’s possible that without Washington at the helm coordinating the army, congress, the state governors and their malita’s and supplies that the revolution may well have failed and America would have remained a British colony.

At the time, horses had been hunted for about 100,000 years for their meat and skin. No one would have imagined that sitting on a 1000lb beast that could kill you with a single kick, would transform humans from hunter gatherers that could only travel as far and as fast as they could walk in to travelers that could spread across continents at speeds that would seemed unbelievable. It allowed human culture to grow from isolated pockets in to the interconnected world we have today.

It was in the huge Eurasian steppe between Hungary and Mongolia were the first horsemen arose some 6000 years ago.

Why someone decided to try and ride a horse for the first time we will never know. Humans are often predisposed to doing some weird things and whether it was a dare or just an idle thought by someone thinking what it would be like to run as fast as a horse. Maybe they found young horse after it’s mother had been killed for meat and hung on to it as it ran.

Whichever way it happened, they managed to tame it and control it, you can only imagine what other people would have thought when they saw them riding at speed on a horse and of course just like today, they all wanted one.

It wasn’t long before horses started showing up in places like turkey and Switzerland well away from  the grassy planes of the steppe and showed the beginnings of the main mode of human transport that would last until the invention of the internal combustion engine nearly 6000 years later.

China is now the number two power in the world behind the US but if it weren’t for the decision a new Chinese emperor in 1424, things could have worked out very differently with China being the first to discover the new world long before the Europeans.

We know that Columbus discovered the new world in 1492, yet over 80 years earlier the Chinese had created huge treasure fleets and on seven occasions between 1405 to 1433 they set out to find new lands and trade.

These expeditions were led by the Chinese equivalent of Columbus, a great navigator called “chung ha”. Zheng He. He created trading links from Taiwan to the Persian gulf and the east coast of Africa all under control of the Chinese court. They were also a show of force to the “barbarian nations” that china had once again become the middle kingdom of the world.

The naval technology was far more advanced than that of the Europeans with the largest vessels, called the Treasure Ships, being nine masted Junks measuring 400 feet long and 150 feet wide with four decks and water tight bulkheads and a crew complement of over 400.

Compare that to Columbus’s voyages over 80 years later, where the largest ship, the Santa Maria was just 90 feet by 30 feet with a crew of 90. It took the Europeans hundreds of years before they built ships as large as the Chinese Treasure Ships.

Each of these Chinese expeditions consisted of over 300 ships with over 27,000 crew, solders and horses, supply ships, water tankers and patrol boats.

The largest treasure ships were loaded with Chinese goods like porcelain, lacquerware and silk which they traded for rare animals, spices, medicines and jewellery which were highly sort after by the Chinese court.

With all these advantages the Chinese were ideally placed to colonise the undiscovered worlds well before the Spanish, Dutch, Portuguese and British but for the decision of the new Chinese Hongxi emperor in 1424.

Along with him came a new wave of Confucianism, he ordered the overseas voyages to stop as it violated longstanding Confucian principles and the new thinking that the enlightened Chinese had nothing to learn from or gain from the barbarians.

By 1500 the Chinese fleet was reduced to a fraction of its previous size and so began the hundreds of years of Chinese isolationism and the colonisation of the new world by the Europeans.

Buran-Energia : The Soviet Space Shuttle 2.0 on a Moon Rocket