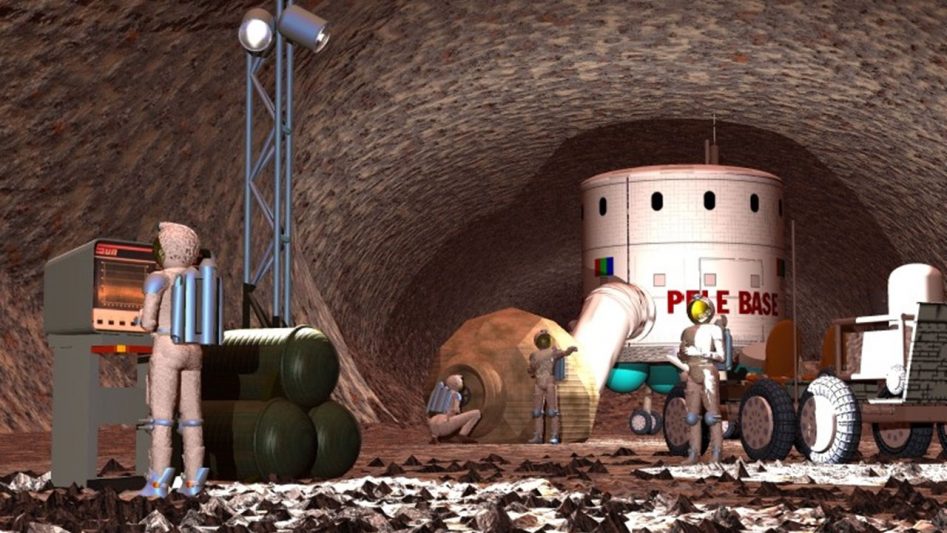 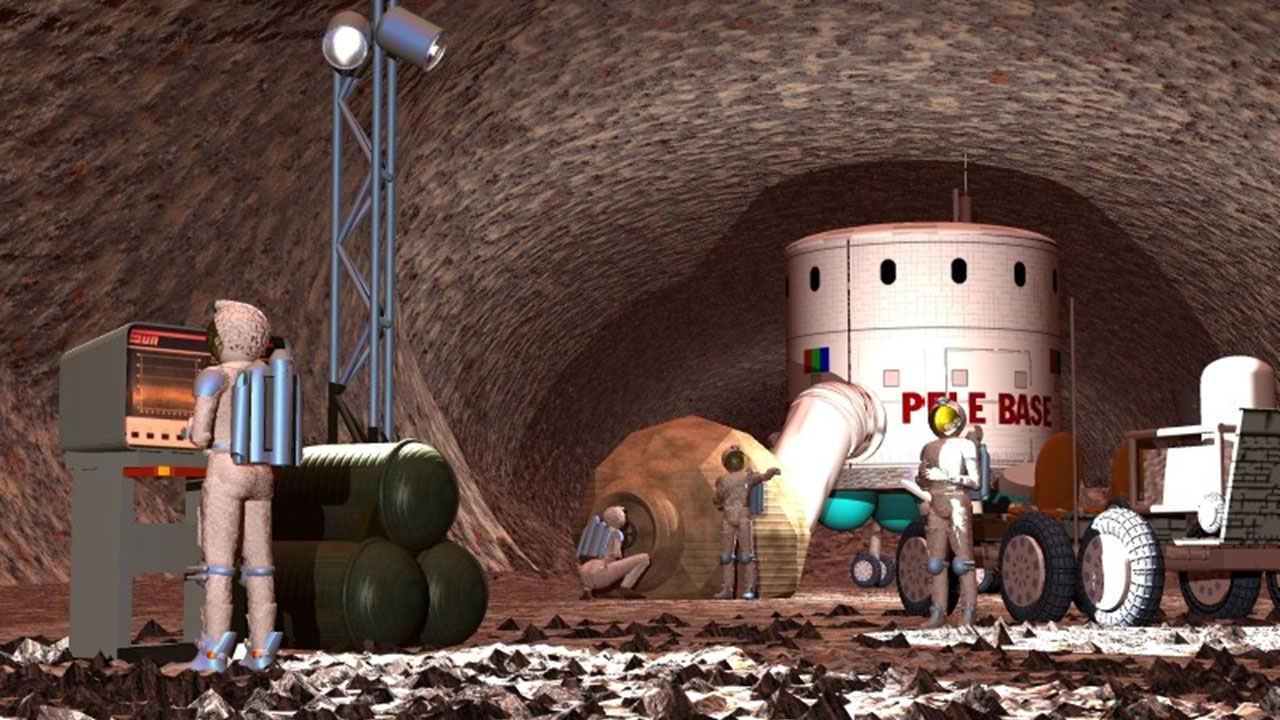 Question:  What do dinosaurs have in common with volcanoes on Mars?

Answer:  It is believed by some scientists that both went extinct at about the same time, some 50 million years ago.

Like the dinosaurs, Martian volcanoes left evidence of their existence behind for us to find.  In the case of Mars, the volcanoes themselves (the biggest in the solar system) can still be seen on the surface from orbit, along with features such as lava flows and lava plains.  But like the dinosaurs, the most interesting remnants of volcanic activity are found underground, in formations called lava tubes.

Lava tubes are caves formed by the flow of lava.  When the lava flow stops, it leaves behind a cavernous tube of rock.  As opposed to limestone caves on Earth, that take millions of years to form and are primarily carved out by moving water, lava tubes can develop much faster and in places where liquid water no longer exists.  Any place that has had volcanic activity can have them, meaning pretty much every rocky planet and moon in our solar system.  Even some large asteroids are thought to have had volcanic activity at some point in their history. 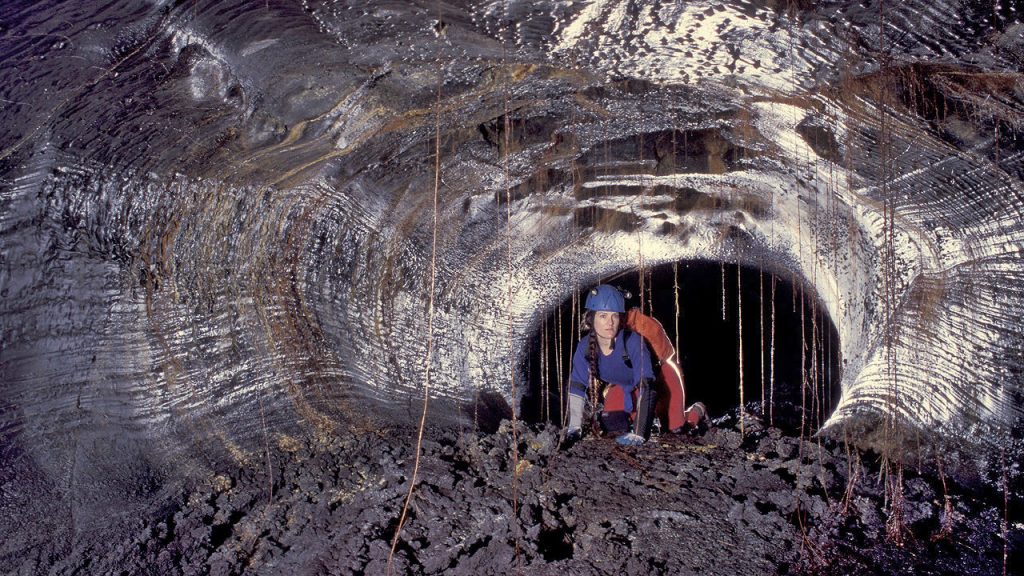 On Earth, you can venture to the Hawaiian islands to get a sense of how these caves may look on other worlds.  Of course, caves on Mars are certain to be different than those on Earth, but there is also a good chance that, by studying the caves on our home planet, we can greatly improve our understanding of the caves on other planets, moons, dwarf planets, or asteroids.

To the delight of scientists, Martian exploration satellites have been snapping photos of cave openings, called skylights, on the red planet for years.  Taking a picture of a skylight is like peeking into an unknown world.  We can’t see a whole lot from orbit, other than the big pile of rocks and dust beneath the opening, but still, it gives us the opportunity for a glimpse of the world below the skylight, and more importantly, it gives us a goal for future exploration. 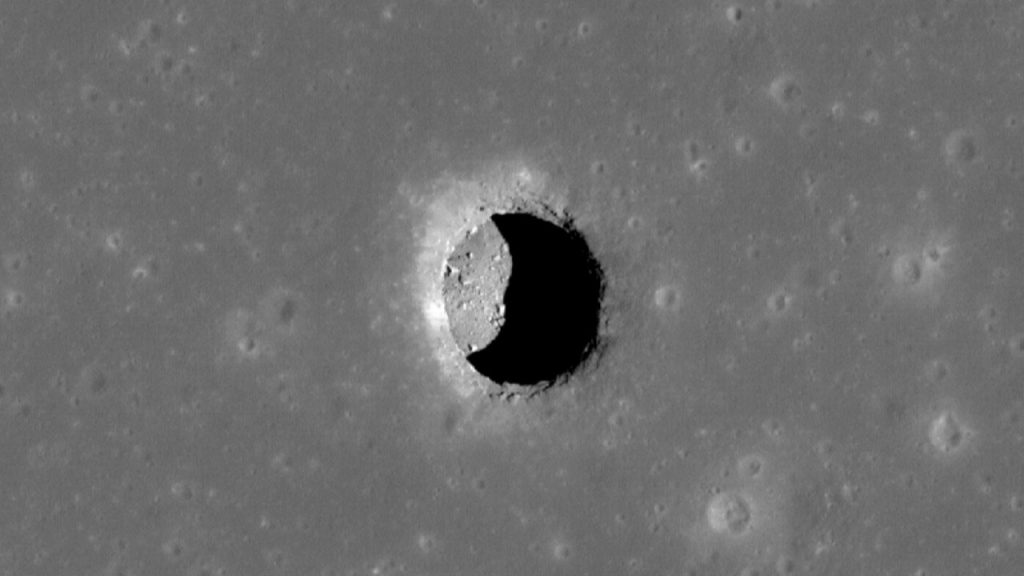 Moon Skylight – the entrance to a lava tube on the moon. Credit NASA/GSFC/Arizona State University

Let’s make a little leap into the future, shall we?  Remember in the movie Armageddon, when they took a bunch of miners and trained them to be astronauts so they could dig into a big asteroid and blow it to bits?  (I always wondered, wouldn’t it have been easier to train the astronauts to be miners?  Just a thought.)  To explore these fascinating caves, we gather up a bunch of experienced cavers and astronauts alike, and train them for this unprecedented expedition.  Now that we have our team, we can strap them to a rocket, make the long flight to the red planet, suit up in some high-tech gear, give them a couple of rappelling lines, and tell them to hit the walls on the nearest lava tube.  Of course, it wouldn’t be quite as simple as that.  It is doubtful that NASA or any of the other space agencies would send a human into a lava tube without sending a robot there first, but let’s assume we’ve conquered the first step and we’re ready for human exploration.

Imagine it.  You stand about 30 meters underground, having rappelled down a skylight into a Martian cave.  Dim sunlight filters through the hazy dust that you awakened at the cave entrance.  Directly below the skylight is a 20 meter tall pile of rubble, mainly dust and rocks, that mimic the surface features…  dry, red, and barren.  It takes you a moment to acclimate to the environment while your eyes adjust to the faint light.  You and your team switch on your headlamps and begin.

The cave walls are rounded at the edges, but the cave itself is so big, you can barely see the sides.  Your skylight has dropped you right in the center of a huge cavity, extending for many meters in either direction.  Some of the caves on Earth’s moon have been mapped to be almost 1 km in width, so it is certainly possible that a Martian cave could be equally as grand.

You have done years of training in the lava tubes on Earth, and this cave is not all that different, just much, much bigger.  Unlike the rocky, red terrain of the regolith and boulder strewn surface above, the cave is alive with colors and textures.  With no liquid water or wind to disturb them, the features of the cave are stationary, waiting patiently for you to discover them.  There are lava drips and soda straws hanging from the ceiling, like rocky chandeliers.  The walls and floors are covered with waxy, bulbous drippings where the chemical makeup of the lava changed over time, creating a tapestry that looks almost like a banana split with multiple layers of chocolate and caramel sauce drizzled over the top.

You and your team have come prepared and you set up a base camp near the skylight.  Cables are run from the field of solar panels just outside the skylight to power huge lights that illuminate the expanse.  This is when the real magic of Mars comes to life.  The walls of the cave look waxy, almost like they are wet.  You touch them with your gloved hand, and, as you suspect, they are not wet, but textured by the movement of the lava flows millions of years past.  You notice that there are vast swaths of paint on the walls, glowing blue and green in the lights.  Upon further review, it isn’t paint at all, but huge colonies of bacteria that spend their days in the near vacuum, eating the minerals on the walls and creating an otherworldly masterpiece.

As you explore, you notice veins of crystal that appear to weave in and out of the waxy, rocky walls.  Not only do these crystals exist in veins, but huge boulders of crystal dot the floor of the cave as far as the eye can see, some reaching all the way to the ceiling.  As you look closer, you notice that these crystals appear familiar to you.  Water ice.  Inside these vast caves, there is frozen water.

After some testing on the ice crystals, you know that the makeup of the water is the same as the makeup of water on Earth…  good ol’ H2O.  Again, you have come prepared, knowing that you might find this precious, untapped resource.  You and your team have brought, as part of your camp, huge vats to melt this water ice and store it for future use.  Inside the ice, hide new forms of living, single-cell organisms, never seen before.

As your team prepares the site for long-term use, setting up large, pressurized tents within the walls of the cave, engineers examine the site to make sure it is structurally sound.  There are no issues because, unlike the lava tubes on Earth, these tubes are formed under ⅓ the gravity, making them bigger, and more resistant to cave-ins.  Your cocoon is strong and safe.

You venture further into the cave and the pressure increases with the presence of an ever increasing amount of CO2, creating a more comfortable atmosphere.  Your pressure suit decreases in size, no longer needing to force against the vacuum. Eventually, you will go deep enough into the cave that you no longer need the pressure suit at all, just a layer of thermal protectant clothing and a breathing mask supplied with oxygen.

On the surface, there is nothing but a vast expanse of desert, scoured by windstorms and radiation.  But just a few meters below, your cave offers the best form of shelter the solar system could provide.  An expansive cavern, teaming with life, full of frozen water, with thick walls protecting from the harsh radiation of space, increased pressure, CO2 to feed your garden, and a mild, constant temperature.

Temperatures on the Martian surface can vary from 68 degrees F, down to -160 degrees F depending on the season and time of day, but this is not a bother to you.  Your habitat is built specifically to exist inside the lava tube where the temperature is near constant and significantly more comfortable than that on the surface.  Climate control equipment for your cave dwelling has less work to do to keep the temperature constant and comfortable for its human inhabitants.

With the network of lava tubes extending over many kilometres, you and your team are able to set up multiple large habitats for a rising number of Martian guests, and you discover numerous species of bacteria and other organisms living within the depths.

Eventually, the cave is closed off and pressurized, allowing the colony to move freely within its vast walls.  The bacteria found in the cave are mixed with the dry, Martian soil, to create a fertile environment to grow a bountiful harvest of various foods.  Water is readily available in the veins running through the walls.  CO2 is eventually replaced with oxygen, creating even more livable space.  Huge fields of solar panels on the surface supply electricity for the habitat.  A new era is ushered in…  the Martian city is born, not on the surface, as many a science fiction author has dreamed, but rather, in the depths.

Of course, this is only my interpretation of the Martian lava tubes and what they might mean to human exploration…  but you never know.  Life in the lava tube might be pretty extraordinary!

F-1 The Engine That Nearly Stopped the Apollo Moon Missions

How the Atomic Race Was Won

Salyut 7 – The forgotten rescue of a dead space station

Rebecca Kelly is a freelance writer, blogger, wife, and mom. Originally from south Texas, she now lives in rural Minnesota where she spends the winters snowed in, writing anything her heart desires. She loves all things science, nature, and space-related and is currently writing a novel on the subject of space travel.