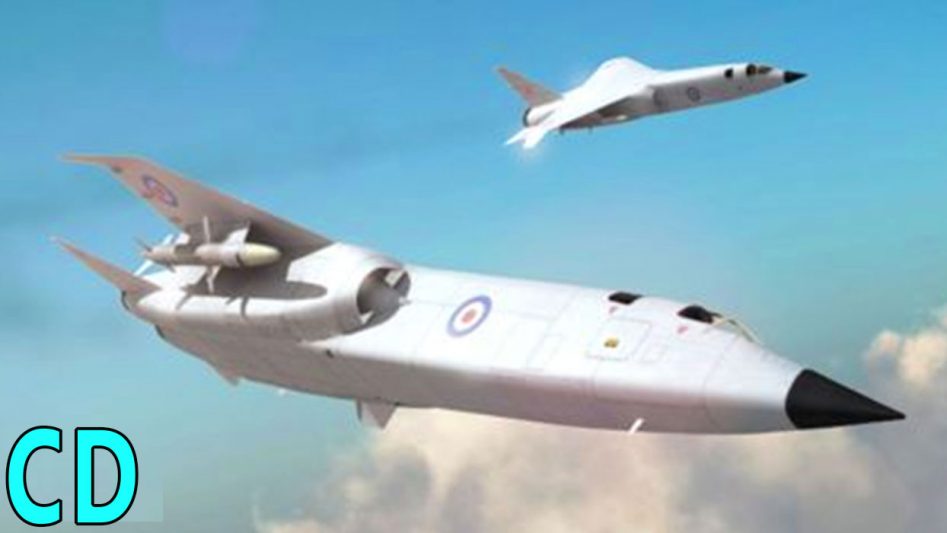 Its said that Modern aircraft have four dimensions – span, length, height, and politics. The TSR.2 was a world-beating jet bomber, which “got the first three right”, but ultimately fell foul of the last one.

In 1957 British aviation was flying high, it was producing the most advanced jets in the world, ahead of everyone including the US. The English Electric Canberra set a world record for an altitude of 70,310 feet (over 21 kilometres). The Canberra was Britain’s first jet bomber, and was more capable than any other aircraft of its class, worldwide. It was widely exported, with America building more than 400 under license. But there was concern that soon the Canberra would be threatened by new Russian interceptors, and a new high-altitude reconnaissance and bomber aircraft would be required.

At the time the British aircraft industry was made up of many different manufacturers all feeding in to the large defence budget. But Britain was spending far more than it could afford and in September 1957, the Head of the Ministry of Supply called a meeting at Shell-Mex House in London, gathering the chiefs of all the major aerospace companies. There he announced was that the Canberra replacement would be the government’s main aerospace contract: but the job would only go to companies that would agree to conglomerate, basically merge or die. The government was determined to ‘cut the fat’, for a more streamlined aviation industry, now that ballistic missiles would carry the Nuclear Deterrent.

The new aircraft had an ambitious specification: the RAF wanted an aircraft that could take off on over 1000 airfields in Western Europe, with just 600 yards of runway. This was considered necessary because, in the event of nuclear war, all major airfields and runways were expected to be destroyed. As well as being capable of ‘STOL’ (Short Take-off and Landing), the new aircraft was also expected to fly at Mach 1.1 at 200 feet and Mach 2.2 at medium to high altitudes. Not only was the new aircraft to be the successor to the Canberra but it could also be a possibly a replacement for the V bombers, Victor, Vulcan and Valiant.

After the meeting at Shell-Mex House, the initial shock gave way to fierce competition for the big contract. Vickers, headed by Sir George Edwards, put forward a single-engined design, called the ‘Type 571’. Although Edwards was a capable administrator, Vickers only real experience with high-speed jet bombers was with the Valiant “V” Bomber, which due to structural issues had to be withdrawn after 5 years. English Electric, on the other hand, had built the successful Lightning supersonic fighter and the super successful Canberra. They submitted a proposal for their ‘P.17’: an advanced concept design that used a detachable VTOL aircraft called the P.17D. It was a radical idea, but the company had proven themselves with the success of the Canberra.

Vickers, however, won the prime contract and were responsible for the front fuselage section, cockpit and weapons. English Electric were contracted to build the wings, tail and rear fuselage. At the time English Electric were looked down upon and seen as newcomers by the much more established makers even though they had considerably more experience with the supersonic aircraft.

This split contract also meant that the project had split management and assembly lines that were well over 100 miles apart. There was also a lot of extra “management input” into the design from the defence ministry. All this extra input leading to extended deadlines and increasing costs.

The aerodynamics of the futuristic P.17 had impressed, and its shape would provide the distinctive look of the new jet. Together, Vickers and English Electric formed a new company with the Bristol Aeroplane Company and Hunting Aircraft, under the name ‘BAC’: the British Aircraft Corporation.

Their project soon became known as the ‘Tactical Strike Reconnaissance Aircraft’ or ‘TSR.2’. Thirty years earlier the Fairey Swordfish had flown as the first ‘TSR’: a ‘Torpedo Spotter Reconnaissance’ plane. But the acronym gave some impression of the advanced capability of Britain’s new, special aircraft. TSR.2 would be fitted with the most advanced electronic systems in the world, with independent targeting, front and sideways-looking radars. The engines would be two Olympus 22R’s, developed by Bristol Siddeley, which would later power the Concorde.
The new engine was an advanced turbojet but it was at the time also untested and its development caused major setbacks to the TSR.2’s development. In 1962 the engine burst into flames during a ground test in a modified Vulcan, destroying both the plan and engine. There were also problems fitting the Olympus into the fuselage: there was so little clearance between the two that each engine had to be precisely measured to ensure it would fit into a particular aircraft.

But on 27th September 1964, the first prototype, ‘XR219’, took its first flight from Boscombe Down in Wiltshire. The aircraft handled beautifully, according to test pilots: like a big version of English Electric’s supersonic Lightning.

The first test flights revealed problems with the landing gear. The ‘long-stroke’ design necessary for a Super Short Takeoff and Landing produced huge lateral vibrations on touch-down which went through entire fuselage and happened to coincide with the resonant frequency of the human eyeball. The result of this vibration was to cause the pilots eyes to shake giving a brief moment of blindness for the pilot, Roland Beamont, on landing.

Engineers worked around the clock to fix the issues one by one, and by early 1965, XR219 was flying well. In the first – and only – supersonic test flight, the prototype broke the sound barrier with only one of its engines on reheat, leaving its Lightning escort which had both engines on full reheat in the dust. A second prototype was about to begin testing, and 17 aircraft were in varying stages of completion.

However, political forces were moving against the project behind closed doors and its cost overruns and delays only adding to the calls from those who opposed to it. There was inter-service rivalry between the RAF and the Navy which deepened when the Nuclear deterrent was giving to the Navy in the form of the Polaris submarines and the RAF “V” bombers were side-lined. The Navy disliked the larges sums of money that were going in to the TSR.2, an RAF project. When Labour won the general election in 1964 there was also the belief that they would undo much of what the Tories had started including the TSR.2.

The RAF were due to take 150 airframes and the first international order of TSR.2 was to be 30 airframes for the Australian Air Force. However, when the British Chief of Defence Staff Lord Mountbatten, who was a navy man and one of the TSR.2’s biggest critic’s, visited Australia, he actively tried to persuade them to order the Navy’s Blackburn Buccaneer instead. He talked up TSR.2’s setbacks, and hinted that the jet might never make it into production.

Meanwhile, the new British Prime Minister, Harold Wilson, had been visiting the United States with the Defence Minister Denis Healey. The Americans also viewed the TSR.2 as a direct threat to their own advanced aviation programs like their ‘swing-wing’ aircraft, the General Dynamics F-111 ‘Aardvark’. They had offered the Australians the F-111 at a knock-down price, and the pitch worked: the RAAF withdrew their order for TSR.2, and instead went with the American F-111.

In the April 1965 budget, the newly-elected Labour Government announced the cancellation of the whole previous tory project, apparently because of budget and schedule over-run. But then, in an unprecedented move both before and since, someone ordered that all the tools, jigs and part-completed aircraft be destroyed. Even a wooden mock-up of the TSR.2 was dragged out onto the runway and burned. Somebody wanted to ensure that there would be no chance of the project coming back to life.

The workers at BAC were baffled, as well as the national press and public. The TSR.2, a ‘world-beater’ and pride of the aviation industry, would come to nothing. Many of the highly skilled workers lost their jobs and ended up going to America. Britain then placed an order for 50 F-111s, but the American aircraft overran in cost and delivery date, just like TSR.2. Some say that the Americans put pressure on the UK government in return for backing of the upcoming IMF loan to the UK but both denied that. Eventually though, with the weakening of the pound against the dollar, the deal fell through.

The RAF repurposed the ‘V-bombers’ to do low attitude missions until a newly-modified Buccaneer and order of American F-4 Phantoms took over the Canberra’s reconnaissance role.
BAC, desperate to keep the knowledge gained in the high-speed jet design alive, offered to use the only flying TSR.2 for 100 hours of research for £1.5M. The knowledge would go towards the new supersonic Concorde project which was to use the same engines, but the government refused.

The cancellation of TSR.2 marked a decisive point, as Britain stepped back from its ambition to ‘lead the world’ in aerospace design, almost as if the government of the day and successive ones have lacked faith in the own home grown industries even when they were world leaders.

Only two airframes remained after a decade of development and over £200 million pounds in investment. XR219, the only prototype to have flown, ended up being used for target practise at the Shoeburyness test range.

XR220 the second prototype, however was luckier and can be seen at the RAF Museum, Cosford.

Considering the extent of the destruction of almost anything to do with the TSR.2 after it was cancelled including photos and film its maybe surprising to know that a third, although much less complete airframe XR222 also survived and after an extensive restoration, it now resides at the imperial war museum at Duxford.

A lot of the knowledge gained from the TSR.2 ended up the Panavia Tornado which did pretty much what the RAF had originally wanted but with a plane built by an international consortium instead of a truly British one.

So thanks for watching and this episodes shirt was the Trip clouds by Madcap England and available from Atomretro.com with worldwide shipping form here in the UK.

I would also like to thank all of our Patreons for their ongoing support and if you are interested in supporting the channel you can find out more by clicking on the link showing.
So thanks again for watching and please subscribe, thumbs up and share.

A Brief History of Moon Hoaxes – Why do people still believe in them?

7 Scariest Animals and Creatures of Your Nigthmares

Sputnik – 60 years on from the Start of the Space Race