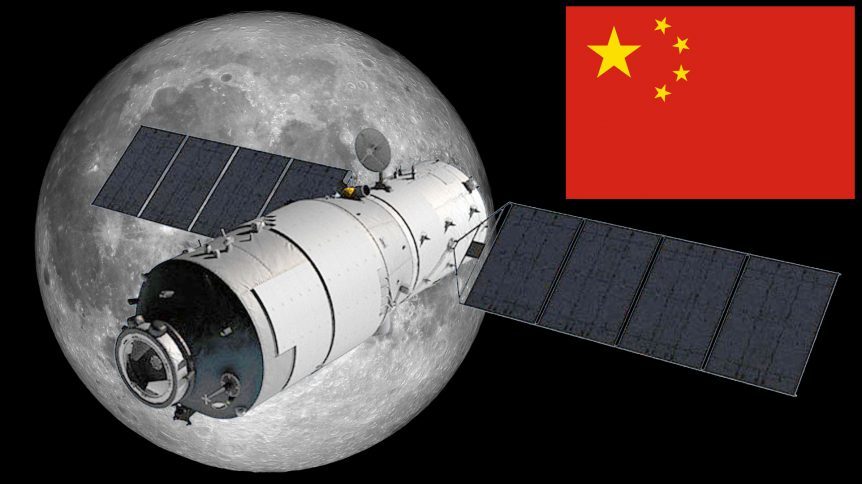 This chart shows a recent survey of satellites and space junk in Low Earth Orbit, listed by the country responsible for creating it. The third country might surprise you: China has left almost as much debris as America or Russia, despite having a much shorter history in space. In fact, most of this was from just one missile test in 2007, when China fired a ‘Kinetic Kill Vehicle’ at one of its retired weather satellites.

The missile hit at a relative speed of 8 kilometres per second (or 17,900 miles per hour), shattering the satellite into more than 900 large pieces, and as many as 35,000 small objects. Many of these will remain orbiting for decades or even centuries.

Now the last time I mentioned China’s 2007 test I got some flak in the comments for picking on China, so yes, other nations have also done the similar things and its legacy of space junk is typical of early missions in many national space programmes. In the 1950s, global powers faced the likelihood that Low Earth Orbit would become a new battleground overhead, and control of that space would be a deciding factor in future wars.

In 1958 Chairman Mao Zedong announced a plan to develop a space launch capability from the country’s ballistic missile program. However, when relations between the Soviet Union and China cooled in the late 1950s and early 1960s, Russian technical assistance stopped. Although the Chinese economy grew slowly through the 60’s and 70’s they did become the fifth nation to independently develop and launch their own satellite system with the Long March 1 rocket and the Fang Hong Dong 1 satellite in April of 1970.

Over next two decades, plans for manned space-flight were put on hold but the space launches did continue to deploy mostly Chinese satellites. In fact, to date, there have been 258 launches using the Long March family of rockets with a success rate of 94.6%. 11 more launches were made with the Feng Bao 1 rocket, although that was retired in 1981 with a rather lower success rate of 63%.

It took until 1992 before the leadership of a modernised China saw value in a space program again, as a way to stimulate and demonstrate advances in engineering and science. In 1992 ‘Project 921’ was approved: its objective, to establish a manned Chinese presence in space.

Now you may be wondering why we don’t see the Chinese on the ISS and working with NASA like the other cold war enemy Russia. Well in 2011, the US Congress passed a spending bill that forbids NASA working with China or Chinese astronauts because they believe China will to use its space program to transform itself into a military, economic, and technological power that may come at the expense of U.S. leadership and would have serious implications for U.S. interests. A copy of the report is available for those interested in the link showing. http://www.uscc.gov/sites/default/files/Research/China DreamSpace%20Dream_Report.pdf

The first step for the new program was the development of a human-rated capsule. ‘Shenzhou’ (meaning ‘Divine Vessel’) flew a successful unmanned test flight in November 1999. Two years later, ‘Shenzhou 2’ carried animals on board to test the life support systems: a monkey, a dog, a rabbit and some snails. However, things did not end well for these first Chinese space-travellers: after a successful re-entry, the landing parachute failed, and the capsule crashed into the ground. Parachute failures where something which plagued the early US and Soviet missions so there was nothing new about that.

Despite setbacks, progress on Shenzhou developed steadily, and on 15th October 2003, Yang Liwei, the first ‘Taikonaut’, travelled into orbit aboard Shenzhou 5, making China the third nation to independently carry a human into space.

The mandarin word for space is Taikong, add the western word naut and you have Taikonaut the Chinese version of astronaut.
Liwei completed 14 orbits of the Earth in a little over 21 hours, celebrating by waving the flags of the People’s Republic of China and the United Nations to the onboard TV camera.

The next phase of ‘Project 921’ was to establish a small space station. By 2011 the Chinese Space Agency had constructed and prepared the 8 and a half ton ‘Tiangong-1’ (translated as ‘Heavenly Palace’). The space lab was capable of supporting three ‘Taikonauts’ for scientific missions of up to a few weeks. The interior was painted in two colours to represent the sky and the ground, helping the Taikonauts to orient themselves in microgravity. However, the main purpose of the prototype was as a ‘target vehicle’, to test docking with the Shenzhou capsule.

But while Tiangong-1 was completing its final ground tests, the Chinese Space Agency faced a new problem: on August 18th, a Long March 2C rocket suffered a failure during the second-stage engine burn and was lost. If the same thing happened during the launch of Tiangong, or a manned mission, it would be disastrous for the entire space program.
Engineers hurried to make more than 170 modifications to Long March 2 in just six weeks, resulting in the new ‘FT1’ version, which was approved to carry China’s first space lab. On September 29th, 2011, ‘Heavenly Palace’ successfully launched into its target orbit.

In June 2012 the first crew of three Taikonauts arrived: including China’s first woman in space, Lu Yang. The Shenzhou 9 spacecraft docked successfully and remained at Tiangong-1 for 11 days. After another manned visit in 2013, Tiangong-1 was put into ‘sleep mode’, and its orbit has been gradually decaying ever since. But it’s almost time for the first ‘Heavenly Palace’ to come back down to Earth: in the early months of 2018, the Inter-Agency Space Debris Coordination Committee (IADC) will track the space lab’s re-entry, to refine prediction techniques for the future.

In September 2016 a second orbital lab, ‘Tiangong-2’, launched from the Jinquan Launch Center in the Gobi Desert, to be joined a month later by a two-man crew aboard Shenzhou 11. With a similar size and design to the first ‘Heavenly Palace’, Tiangong-2 was able to support Taikonauts Jing Hipong and Chen Dong for 30 days. During this time, they tested a range of scientific instruments, including the first-ever ‘Cold Atomic Clock Experiment in Space’ (CACES), which operated at only a fraction of a degree over absolute zero: so accurate that it only loses one second every billion years.

As well as setting up an independent manned space program, China is also breaking new ground with a series of high-tech moon landers. On 1st December 2013 a 1200kg lander named ‘Chang’e-3’, launched on a mission to the Moon.

Five days after launch, Chang’e-3 entered an orbit approaching 100-kilometres (62-miles) altitude above the lunar surface. After a second decelerating burn on 14th December, the lander descended to just 100 metres altitude at Mare Imbrium, hovering in position as its onboard cameras located a clear landing site. Executing a 12-minute landing sequence, Chang’e-3 touched down successfully: the first lunar soft-landing in 37 years.

But the mission was far from over: like the Soviet Lunokhod rovers in the early 1970s, Chang’e-3 was equipped with a nuclear-powered heating unit to survive the harsh lunar nights. As well as having an array of scientific instruments, the Chinese lander carried a 140kg (310lb) rover, called ‘Yutu’, which explored a volcanic crater near the landing site. The rover was named by a public poll: in Chinese Mythology, Yutu was the pet rabbit of Chang’e, the Moon goddess, so in the west, we know the rover as the jade rabbit, moon rabbit or just rabbit.

But this rabbit came to a bit of a sticky, intermittent end in January 2014 when it had a “mechanical control abnormality” according to the Chinese state media, though many in the west believe it fell victim to the highly unforgiving lunar dust jamming its mechanics. It intermittently communicated with earth up till March 2015 when it finally stopped.

But China aims to go even further in 2018, when the backup lander for the Chang’e-3 mission is scheduled to touch-down on the far side of the Moon, as Chang’e-4. This will be an impressive ‘first’: all the American and Soviet soft landings were executed in direct line of sight with Earth. The proposed landing site is the ‘South Pole-Aitken basin’: a candidate for the largest impact crater in the Solar System, with a diameter of 2,500 kilometres (or 1600 miles).

Here, China’s lander will be able to examine 15 kilometres (8 miles) of exposed crust, hopefully uncovering evidence to help us understand the Moon’s violent past.
In 2016 China launched 22 rockets, more than Russians and the same number as the US. It has plans for a 3rd space station and its own space telescope in the mid-2020’s with aims to put men on the moon by the mid-2030s, so it looks like NASA, ESA and SpaceX will have some serious competition in the near future.

How do you Escape from an Exploding rocket? – Launch Escape Systems