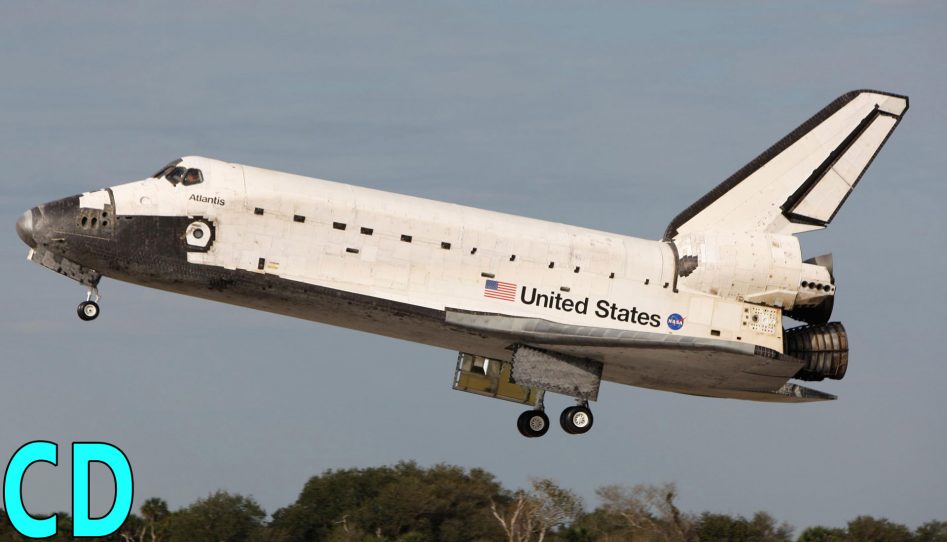 When the space shuttle was announced in 1972 it was seen as the space vehicle to make low earth orbit space travel and living in space an everyday reality.

But in hindsight many now believe that it was a failed project that was hamstrung by lack of funding and interest by government and sky high expectations from NASA that led them to sideline safety to ensure scheduled launches continued on time in order to secure future funding.

Instead of expanding man’s horizons, it in fact limited them and stopped the development more effective, safer forms of both manned and unmanned space transport. It ultimately become the deadliest space vehicle in history and more expensive than the expendable rocket systems it was meant to replace.

But wasn’t meant to be like this, NASA had originally proposed the Space Transport System or STS as it was known, which was a system of reusable manned space vehicles in 1969 as the successor to the Apollo program. The STS was going to consist of a permanent space station in low earth orbit, a small cheap space shuttle to transport astronauts to and from the earth and the space station, a space tug to move men and equipment to different earth orbits but could also double up as a lunar lander and a nuclear powered space craft to go between the low earth orbit and the moon or to other planets in the solar system.

The two main goals of the STS were to reduce the cost of spaceflights by replacing the then current rockets like the Saturn 5 that took men to the moon and that could only be used once, with reusable spacecraft. The second was for it to act as support for NASA’s more ambitious goals of permanent manned space stations around the earth and the moon and then manned missions to Mars.

Werner Von Brown, architect of the moon missions, wanted NASA to follow up Apollo and go to Mars and the military liked the idea of the of a reusable shuttle to deliver its satellites and do other things, However, after the success of the Apollo missions and the race to put a man on the moon was over, public and political interest in further manned missions waned and congress became unwilling to maintain the huge funding which had peaked at 4.5% of the Federal budget in the late 60’s, so it was cut to a fraction of that in the early 70’s.

Based on this the Nixon chose to reject the STS and manned missions to Mars and go for just the space shuttle but in an upgraded form that allowed it to carry both men and payloads. This suited the military and the Nixon administration but due to the cost cutting and the need for the shuttle to be seen as an all-purpose transport system, the design has in hindsight, become to be seen, as not only compromised but also inherently unsafe and in the long run exceedingly expensive, the very things it was supposed to avoid.

The shuttle system was to use external solid rocket boosters (SRB’s) to help it get in to space whilst the Shuttles main engines were supplied with liquid fuel from a massive external tank which the shuttle and the SRB’s would be attached to, unlike the previous space launch vehicles which were self-contained liquid fueled rockets with the main modules and crew at the top and away from the fuel and exhaust.

The use of the SRB’s and the external fuel tank were down to the Pentagon wanting a high capacity payload for its satellites and the Nixon administration to keep the costs down by reusing parts.

Some say that trying to achieve reusability with early 1970’s technology forced design decisions that compromised both safety and reliability. Reusable main engines were made a priority which meant a new design with new materials were required. The refurbishing of these after each flight turned out be more expensive than building new existing designed ones like the those used on the Saturn 5 and allowing them to burn up on re-entry. Because the main engines were mounted to the shuttle and not the launcher, the payload area was significantly reduced.

This design of having the shuttle strapped to giant super cooled fuel tank and having two effectively uncontrolled solid rocket motors, that once fired could not be turned off, in time lead to the failure of two of the five shuttle craft and pushed the operating costs almost as high as the flights themselves.

Compared to the Russians and Chinese, the only other nations to operate manned missions, the shuttle has turned out to be the deadest space vehicle in history so far, with the loss of 14 crew, two of the five shuttles and two of the 135 missions.

This works out at a vehicle failure rate of 40% and a flight failure rate of 1.5%. A figure which was borne out by Richard Feynman in 1986 at the official inquiry in the challenger disaster and 17 years before Columbia.  Feynman said then, that NASA’s managements own estimate of 1 flight failure for every 100,000 flights was wildly fantastical and after he anonymously polled the NASA engineers themselves of what they thought the odds of a failure would be, he came back with an average figure of 1 failure in every 100 flights. We have now had the benefit of seeing the entire shuttle program through to the end and the actual failure rate was 1 failure for every 68 flights, which is nearly 1500 times worse than NASA had predicted that should it have been.

The Challenger disaster of 1986 was blamed in equal parts on the failure of the one of the seals of one of the SRB’s because of the unusually cold launch conditions and NASA’s management that had attempted to launch at all costs, even when warned that doing so could lead to the loss of the entire vehicle.

But if the design had been different and hadn’t used the SRB’s then this failure would not have been possible.

Equally the breakup of the Columbia on its re-entry in 2003 can traced back to the failure of the heat resistant tiles on the underside of the left wing of the craft. This was caused by flying debris falling off the main fuel tank and damaging the tiles at launch.

This flying debris which was a mixture of insulation foam from the main fuel tank and ice from atmospheric condensation was a common occurrence and well known about, in fact impacts with the shuttle had happened on a regular basis and missing tiles can be seen in this shot of the shuttle in orbit.

It was this gradual acceptance by NASA managers of more events outside the design tolerances, simply because it had not caused a catastrophic failure before, that enabled the design flaw of strapping the shuttle to the side of a fuel tank were frozen debris could fall off and hit the shuttle that meant in reality it was only a matter of time before an accident like that of Columbia would happen.

If the shuttle had been mounted on top of or away from the fuel tank as main modules were on previous launch vehicles or even if the thermal tiles had been designed to withstand minor impacts the loss of Columbia could have been avoided.

One of the main goals of the shuttle was to bring the cost of space launches down, it was envisioned by NASA’s engineers that each shuttle would fly up to 50 missions per year but in reality the complexity of the shuttle maintenance and repairs took months between flights and this reduced the average number of flights to about four per year for the entire fleet.

In 2011, the final cost of each shuttle flight, when allowed for design and maintenance had been worked out is was approximately $1.5 Billion or about $27,000 per pound of payload. This in comparison to the originally envisioned costs of around $118 per pound in 1972 ($657 adjusted for inflation to 2013).

The expendable Russian Proton cargo launchers, which are still based largely on a 1965 design is estimated to cost around $110 Million per flight or about $2,300 per pound and the 2014 prices for Elon musk’s SpaceX are at between $1000 to $2500 per pound for communications satellites.

Since the end of the shuttle missions the only way to get people to and from the International Space Station has been by the Russian Space Agency Soyuz rockets and although the cost has never been officially publicized by the RSA, its believed to be around $80 Million per launch, which is still much cheaper than the Shuttle and it has operated with 100% success rate and zero fatalities.

It’s rather ironic that the system developed by the Soviets to prove communist superiority in the space race and which was derided by the USA, is now the most reliable and the most commercialized in the world.

The Shuttle is an old design that used parts in many cases that are 30+ years old towards the end of its service. This was brought to light in an unusual way when in 2002, NASA had admitted that it had scoured Ebay for outdated medical equipment which used the intel 8086 CPU’s that powered the first IBM PC’s back in 1981. The Shuttle used these now obsolete CPU’s in diagnostic equipment that checked the SRB’s were safe for launch.

This also highlighted the fact that the original design life for the shuttle was 10 years but due to the cut backs from government and the enforced make do and mend policy, meant that NASA had to make the shuttle last for 30 years, 20 years longer than expected.

In 2007 NASA administrator Michael D Griffin wrote a paper in which he said that if the Saturn program and commercially available boosters had been continued instead of developing the shuttle, it could have provided six manned launches per year, 2 of them to the moon, have the capability lift heavier payloads and all for the same price as the shuttle.

Adopting the shuttle kept, new more efficient and safer designs from NASA out of the skys and led to the growth of the private space craft industry which is now doing what the original STS program was going to do but without the hindrance of government policy depending upon which way the political wind is blowing.

The main difference between these and the shuttle is not technical but that they have being designed to be profitable commercial space craft from the outset, made from commercially available parts from a private enterprise chain with paying customers including NASA.

Now it is expected that NASA will be looking to give the business of moving men and materials to places like the International Space Station to the private sector which can do it cheaper and better and leave NASA to the job its best at and wanted in the first place, which is pushing the boundaries of what can be done and sending men to Mars, that if the private sector doesn’t get there before them.