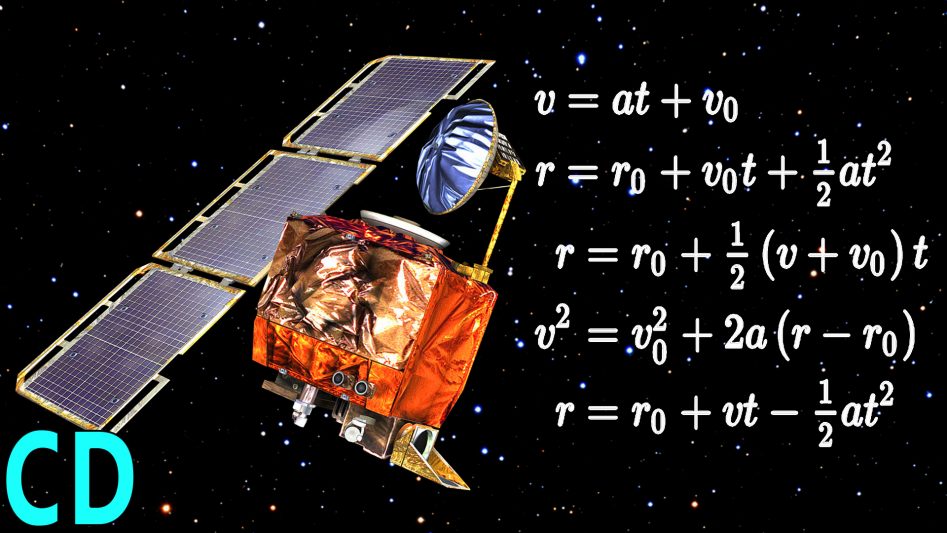 For all the knowledge of the thousands of scientists and engineers in the space industry, sometimes the old adage “The best-laid plans of mice and men” can equally be applied to their efforts. This was certainly the case on the Mars Climate Orbiter mission of 1999 and this would go down in space history as one of the biggest facepalms to date.

If you’re an avid comment reader, you may have seen comments on my videos about why I tend to use both Imperial and metric units, instead of just metric and the simple answer is that many people in the US and UK, still use the imperial system even though metric is now the defacto measurement system in science and engineering worldwide.

Now, this is fine providing that you don’t get them mixed up when your doing calculations, like the engineers and navigators of Lockheed-Martin and NASA, did in 1999.

In the late 1990’s NASA was under pressure by the Clinton administration to make each mission go ‘faster, smaller,’ and ‘cheaper’. So, rather than focussing on a single grand project, NASA diversified their operations. This meant that in 1999, while servicing the Hubble space telescope and building the International Space Station, NASA also planned a low-cost program to operate three missions simultaneously on the red planet. The ‘Mars Surveyor 98’ program featured the Mars Polar Lander, with a pair of impactor ‘micro-probes’ on board, and a satellite and communications relay which was the ‘Mars Climate Orbiter’. This extra-terrestrial probe, it was hoped, would conduct the first long-term, detailed study of Martian weather.

Mars Climate Orbiter had to be low-mass, so it was fitted with a single solar panel rated for 500W at Mars. This asymmetrical design meant that the spacecraft was subjected to rotational force as the panel caught waves of solar wind. The probe could correct for this using onboard reaction wheels: but these needed to be periodically ‘desaturated’ or reset, with corrective burns from its hydrazine thrusters. These routine manoeuvres were recorded in a file on Lockheed-Martin’s ground-based computer, from which navigators had calculated periodic course corrections.

However, during the 9-month, 416 million mile (670 million kilometre) trip, regular, tiny thruster burns were compounding into a sizeable problem. As was customary, Lockheed-Martin’s contract stipulated that all communications should use standard metric units. So, in daily sensor readings, all data was assumed to be the metric standard: newtons of force per second. Unfortunately, there had been a major oversight: the files actually contained measurements in pounds of force per second: using the ‘Imperial units’ still widely used in the launch industry.

Because 1 pound force = 4.45 Newtons force, each of the corrective thruster operations was underestimated by a factor of 4.45 and putting the craft into the wrong trajectory. This showed up when several navigators at NASA’s Jet Propulsion Laboratory (JPL) noticed that something was amiss: the probe was making more than ten times as many minor adjustments as planned as it tried to compensate to keep it on course. However, these concerns were never raised formally.

On September 23rd, 1999, Mars Climate Orbiter was scheduled to approach the Martian surface at a distance of 140 miles, or 226 kilometres, while performing a long retrograde burn, to enter an elliptical orbit around the red planet. Just one day before arrival, JPL’s latest calculations indicated that the probe might be off-course, and could approach Mars at an altitude of just 93 miles (150 kilometres).

The operations team met and discussed the possibility of executing a contingency burn to raise the trajectory of the probe: but with only a day to upload and carry out this manoeuvre, and some uncertainty about the precise location of Mars Climate Orbiter, the burn was never executed. Now, the team could only hope that the approach wouldn’t be further off-course than calculated. If the probe’s altitude dipped lower than 53 miles (80 kilometres), it would burn up in the atmosphere.

Far from Earth, Mars Climate Orbiter continued its course, and at 9am UTC, began its main-engine burn. The probe decelerated, and passed beyond the horizon of Mars, out of radio contact. Twenty-three minutes later, the ground team listened for a signal: but heard only silence.

The Mars Climate Orbiter was never heard from or seen again, and no wreckage has been found to date. But more detailed calculations later indicated that its course fell to just 37 miles (60 kilometres) from the surface. At this altitude, there was no way back: atmospheric friction was far beyond the fragile probe’s limits, and the Orbiter was destroyed.

After the incident, a report was commissioned, which is still available to download and read, which criticised a lack of communications within NASA and with contractor Lockheed Martin and the lack of training for key operatives on the mission. Lockheed-Martin and JPL learned from their mistakes. Five years later, the two organisations together developed the Mars Reconnaissance Orbiter, a mission that accomplished many of the goals of its ill-fated predecessor, using exclusively the international language of scientific measurement, namely the metric system.

Now technically the probe was not lost because of maths but because the calculations were fed the wrong information, namely good old-fashioned human error. It’s the old programmers saying of “rubbish in, rubbish out” but when all the data is correct, it’s amazing what can be done with just the power of math, our modern world and things like space probes to Mars would just not be possible without someone doing the calculations. If you ever wondered what it takes to calculate the route for a Martian probe, Well the guys over at brilliant.org can help you.

Brilliant is an interactive problem-solving website where you get to learn by solving real-world problems and think like scientist or astronomist.

There are tons of problem-solving courses on things like Gravitational Physics that underpin the motion of the planets or you can try your hand at Astronomy and do things like find the size of the universe and if you’re into rockets and stuff you can try classical mechanics to work out how things move around on the earth and in space.

Sounds like rocket science, well it is, but that doesn’t mean it has to be hard. Brilliant do this by showing you problems and breaking them down into easy to understand steps, then putting them back together so you can see how the overall process works. They also have a large active worldwide community ready and willing to help you along every step of the way, so you’re never alone.

To help support us at curious droid and learn more about Brilliant, just click on the link to https://brilliant.org/curiousdroid and sign up for free. As a special bonus for curious droid viewers, the first 200 people to sign up will get a 20% discount off their annual subscription.