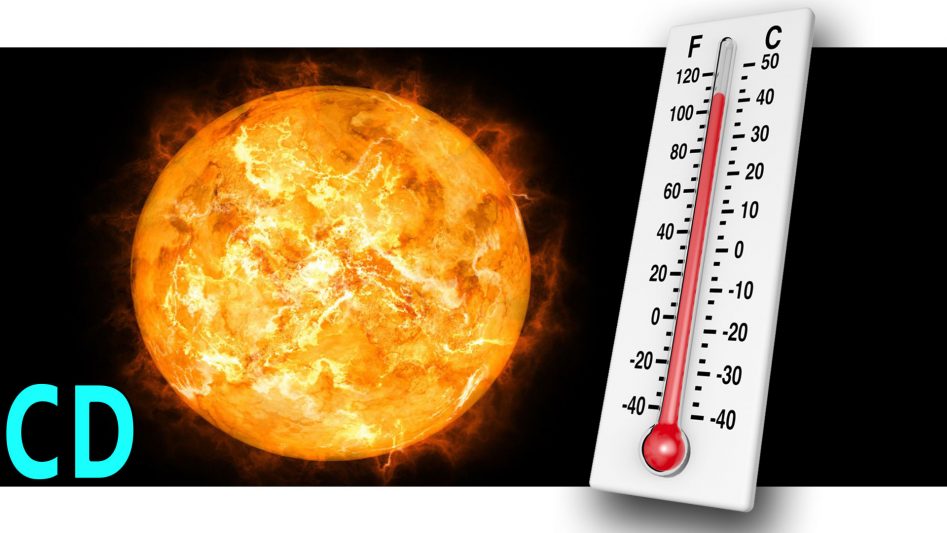 Why is the sun hot?,  now before you jump on the comments and say “because it’s the sun, stupid” think about it, our sun is basically a giant nuclear reactor at the centre of our solar system but not like the ones on earth. They create energy by nuclear fission, that is they split large atoms like uranium into smaller lighter ones and in the process it releases a large amount of energy. Atomic bombs also work in the same way which is why they are so destructive.

The sun creates its energy by nuclear fusion, the most efficient way to create energy in the universe, other than matter-antimatter annihilation. Fusion works the other way around and fuses nuclei or the centre of atoms of the lightest and most abundant element in the universe, hydrogen, together under enormous pressure and heat to create helium, the second lightest element. Again, in the process of doing this, a huge amount of energy is released and this ultimately provides the energy for all life on earth.

Compared to the earth, the sun is massive, you could fit 1 million earths in the sun and still have a bit room left for a few more. It measures 864,000 miles across, the earth, by comparison, is 7918 miles across.

At the centre of the sun is the core, this is the heart of the sun where 99% the nuclear fusion takes place, and even this is about 200,000 miles across, 16,000 times the size of earth. As the mass of the sun’s core is so great, the effect of gravity is so strong that the pressure in the core is about 265 billion times greater than that of the air pressure at sea level on earth. This enormous pressure pushes up the temperature to 15 million degrees Celsius and its this combination of pressure and heat that allows fusion to occur and the energy to be released.

To give you an idea of just how huge that amount of energy is, according to Enerdata.net, the worlds entire consumption of energy in 2015, including oil, gas, coal & electricity was about 13,400 Mega-toe. If you unfamiliar with the “toe” measurement, it means “Tonne of Oil Equivalent” or the amount of energy released by burning 1 tonne of oil.

So the total energy used by us humans, in 2015 was the equivalent to burning 13,400 million tonnes of oil. When we compare that to the output of the sun, the sun would put out enough energy in one second to power the entire world for just over 688,000 years.

The astronomer George Abell illustrated it in another way. Imagine a bridge of ice 2 miles wide by 1 mile thick and extending the 93 million miles from the earth to the sun. If all the suns energy were focused on to it, it would melt the whole thing in 1 second.

Luckily for us this energy is radiated out in all directions, so we only receive a tiny fraction of that otherwise the earth would be burned to a crisp. In fact the earth receives just 0.000000045% of the sun’s total output but even that is still about 7,500 times more than we consume.

Now while the centre of the sun 15 million degrees, by the time the energy reaches the surface it’s down to a much more manageable 5,500 degrees Kelvin, which if you’re into photography, film or video is where you get the colour temperature of daylight from.

From there It takes just 8 minutes for the light to reach the earth. When it arrives, Some of it is reflected back into space and some is absorbed by the atmosphere but on a clear day around 70% reaches the surface to then warm the atmosphere and give us our “Goldilocks zone” planet, it’s not too hot and it’s too cold, it’s just right….

The sun is a middle-aged star and although it has been going for about 4.5 billion years, it’s been getting brighter as it gets older at the rate of around 1% every 100 million years.  In another 1 billion years it will be 10% brighter than now and although that might not seem like much, it will probably make the earth too hot to support complex life like us.

So we have a few 100 million years left to evolve into a space-faring species and find a new home amongst the outer planets or out to the stars beyond, if we don’t make ourselves extinct in the process and if we do, we just got to hope that what life evolves after us can do a better job before the sun cooks the earth…So as always thanks for watching and please subscribe, rate and share.

How Australia Helped Save Apollo 13

Is this the fastest thing in the universe?