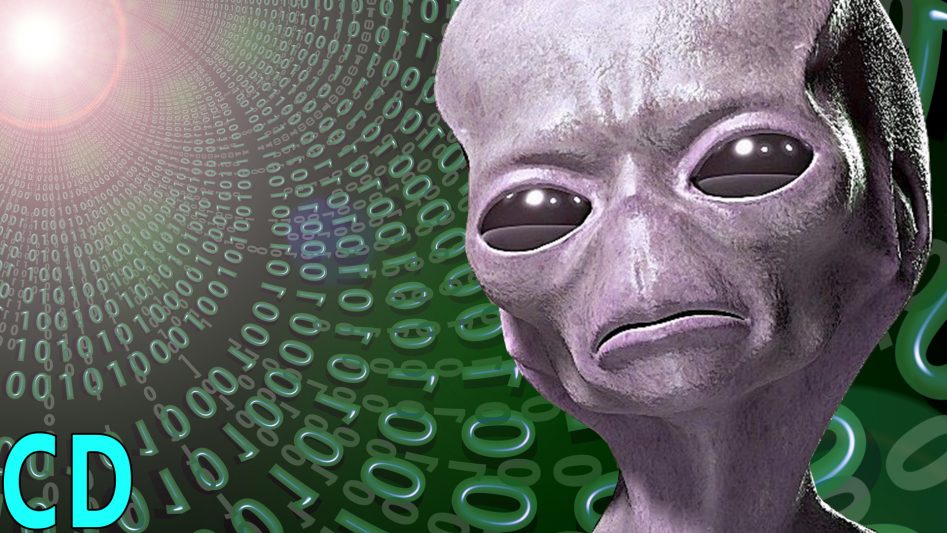 We have been searching for signs of extra-terrestrial life for the last 50+ years, and so far we have found no evidence of anything beyond our planet.

But what are we searching for?. We are framed by our own human expectations, our current technology and understanding of the universe and the physics that we believe make it.

The first problem is that if we got a signal or message from ET, could we understand it. Would it be a signal broadcast and intended for other civilisations like us and that might have clues in it as to help decipher it or would it just a by-product of something they are doing going about their everyday existence.

Take our output into the cosmos for example. For the last 100 or so years, we have been accidentally transmitting radio waves into space from the most basic spark transmissions of Marconi’s first tests to high-speed data communications with satellites of today and everything else in between.

All of this information is intended for us, not for extra-terrestrial beings.  For any ET’s discovering our transmissions, assuming they were nearby and not hearing those first spark tests of Marconi, It would be a bit like us stumbling across ancient writings in an unknown language and trying to figure out what the message is saying.

In fact, there are still a hand full of ancient writing systems like “Linear A” that we still can’t decipher and they were written by modern humans just a few thousand years ago. Any message from ET will be coming from a civilisation that would have evolved in a radically different way from us.

Another example we might find on earth is that of dolphin, whale & elephant communications. We know they are intelligent and they communicate using some form of language but we have little to no idea of what they are saying to each other.

Theorists believe that whilst decoding any message from ET may be extremely difficult, by looking at the way the message was sent could lead to clues to decipher it. The fact that it is being received via a radio transmission and would have to have been encoded into the radio signal in some way, mean that ET may not be that different from us, in that they understand about the universe and sending a signal and thus they must know about maths and so on and so on. This could lead to possible extra-terrestrial  Rosetta stones that would unlock further meaning in the message.

The second problem is that the distance between us and any potentially advanced species is huge. We also have to be looking in the right place at the right time, if a signal only lasts a few seconds or minutes and our receivers are looking in a different direction, we’ll miss it or it could be so weak because of the distance that we could not detect it in the first place.

If we were very lucky, we might receive a signal from less than 100 light years away but more likely it would be from thousands or tens of thousands of light years way as that’s where most of the stars and potential life-supporting planets would be in our galaxy.

This effectively rules out any realistic chance of communication. Assuming we got lucky and we received a signal today from a local source 100 light years away. If we sent a reply within a few months after figuring out whether to respond or not, it would be another 100 years before they got our reply, a two hundred year round trip, that’s even if they are still listening or even able to listen.

And this brings us to the third problem in that It will be highly unlikely we will be at the same stage of technological development as ET. The earlier distance problem compounds this. If we receive a radio signal from a source 10,000 light years away, that would have been sent when we were still living in caves and ET may have been, technologically where we are now.

It’s hard to imagine where we might be in 10,000 years time at our current rate of development but the chances are we will have found a radically different way of communicating across the vast distances of space.

The extra-terrestrials that sent the message 10,000 years ago, may now be using technologies which way beyond our understanding or ability to pick up and that’s why it might seem to be so quiet out there.

We might be doing with radio, what is the technological equivalent of trying to pick up an email with a couple of cans and a piece of string.

We are listening for ET using a basic method of modulated radio waves which would far too slow for any advanced space faring species to use.

I can’t say what methods they might use, maybe interdimensional or quantum entanglement, we won’t know until its discovered but whatever it is, it will have to be faster than light to make it useful over the vast distances between star systems, which puts it out of the realm of our current understanding of physics.

So whilst we have nothing better than radio, I personally don’t think that we will find any signals from ET, even though I do think that there are many, many advanced civilisations out amongst the stars in our own galaxy.

If we do find anything with radio, it will be from ET’s that will be too far away for any communication with and probably in the same situation as us, isolated pockets of intelligence that haven’t yet figured out how to get from one star to another within the lifetime of the crew.

Everything else will be way, way ahead of us and maybe not really interested in communicating with species until we can communicate with them at their level, just as we don’t go backwards when we discover a lost tribe.

What Happened to the Soviet Supersonic Jump Jets?