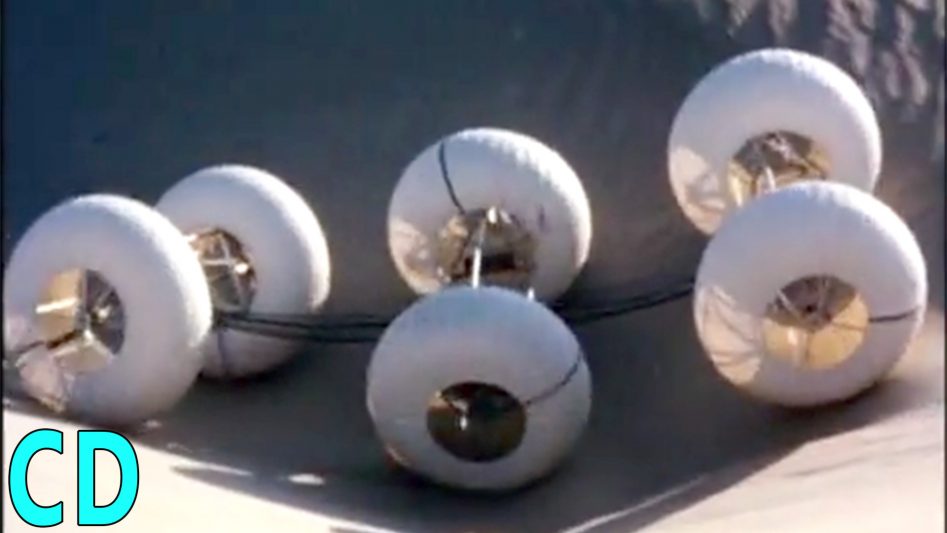 For the last 50 years or so we have been using wheeled robots and vehicles to explore other worlds from secret Soviet lunar rovers to the first lunar car to the latest Mars Rovers, we owe a lot to our extra-terrestrial wheeled helpers.

NASA recently released new concept art for ‘the Mars 2020 rover’. The robotic lab is shown in action in its potential landing sites on Mars: currently, three locations are being considered, and a final decision will be made in 2018 or 2019. If the images look like something you’ve seen before, it’s because the new rover is the same core design as ‘Curiosity’, the Mars Science Laboratory, which has been exploring the red planet since 2012. Both rovers are developed by NASA’s Jet Propulsion Laboratory and are about the size and weight of a Mini Cooper. These are both big, and heavy rovers.

‘Curiosity’ and the 2020 Rover follow decades of mobile robots and cars landing on foreign worlds. Some of these are still in action: every day NASA sends instructions to ‘Curiosity’ to do new science on Mars, and the 2004 robot ‘Opportunity’ is still roving around Mars after 13 years.

To date, ‘Opportunity’ has travelled further on the surface of Mars than any other robot: a total of 43 kilometres or 27 miles, not a lot granted but then it has only got a top speed of 180m/h about 196 yards but normal travels at about 20% of that at around 36 meter or about 39 yards per hour.

However, second place in the distance rankings goes to one of the first extraterrestrial rovers: Lunokhod 2. The Soviet ‘Lunokhod’, whose name means ‘Moon Walker’, was a fully automated explorer and built in secret by the Soviets to compete with NASA’s manned Apollo program.

The chief engineer assigned to the project was the tank designer Alexandre Kemurdzhain, who had previously worked on heavy-tracked vehicles and hovercraft, and had a reputation for creating innovative and capable vehicles. Gathering a team of his former colleagues to work with him, Kemurdzhain’s first prototypes for the Moon rover used tracks, like a tank. However, in testing, these designs got stuck in difficult terrain more often than Rovers with free-moving wheels. Switching to a new design with 8 independently powered wheels, Kemurdzhain’s prototype could keep moving even if all but three became stuck: a level of redundancy that would be essential for extended exploration where there was no chance of recovery if thing went wrong.

Kemurdzhain’s team knew that survival through the extreme temperatures on the Moon was going to require some extreme engineering. To deal with this, Lunokhod had a lid or ‘frying pan’ as it was known, that opened to uncover its solar panels. These would charge the rover during the lunar day, and then close to protect the electronics from the harsh cold of lunar night, where temperatures drop as low as -173 degrees Centigrade or -279 Fahrenheit. With the lid closed, Lunakhod used a Polonium-210 radioisotope heater, to warm its electronics until sunrise, fourteen Earth-days later.

On February 19th, 1969, the first Lunokhod was loaded on to the Proton rocket, ready to launch from the Baikonur Cosmodrome in Kazakhstan. There was still a chance for the Soviets to score a victory in the Space Race against the Americans. Two months earlier, Apollo 8 had flown astronauts Borman, Lovell and Anders around the Moon, but Apollo 11 was still six months away. If the Lunokhod worked, the Soviets would be the first to move freely across the lunar surface with their fully-automated rover.

However, a few seconds after launch, the Proton rocket exploded, spreading the Lunokhod and it’s Polonium-210 heat source through the Russian atmosphere.

Because the program was a secret and the Soviets didn’t publicise their failures, the rest of the world wouldn’t know about the “would be” first moon rover until years later, when Soviet documents were declassified.

Ultimately, it would be sixteen months after Neil Armstrong’s historic first steps on the moon, by the time Kemurdzhain’s team finished another rover, which in typical Soviet style, adopted the name Lunokhod 1, effectively airbrushing the first failure from Soviet space history.

Seven days after launch, the Luna-17 lander touched down on the North-west edge of Mare Imbrium, or the ‘Sea of Rains’. Then, responding to commands from Earth, the pioneering rover rolled down the lander’s ramps to make the first wheeled tracks on the Moon.

Lunokhod 1 successfully operated for ten months, taking more than 20,000 photographs and conducting 500 soil tests over 6.5 miles, or 10.5 kilometres. In 1973 Lunokhod 2 went even further, exploring 39 kilometres or 24 miles of the Moon in just five month

By the time Lunokhod 2 completed its exploration, NASA had proven their own, very different solution for travelling on the moon’s surface. The ‘Lunar Roving Vehicle’, (or ‘LRV’) first used on the Apollo 15 mission, was a lightweight dune buggy style ‘car’: weighing 210 kilogrammes on Earth, or just 35 kilogrammes in the Moon’s low gravity.

But in the planning stages, that iconic ‘dune buggy’ appearance of the LRV was far from assured. Early concepts tried out giant 12-foot wheels, and even corkscrew propulsion, to deal with the possibility of a quicksand-like lunar surface. It was only in 1966 when NASA’s ‘Surveyor 1’ robotic lander confirmed that the Moon’s surface was able to support a heavy probe, that a set of compact wheels were chosen.

In development, several rover concepts were considered, including a mobile pressurised cabin, providing a base of operations to support exploration of the lunar surface for up to two weeks. The four-ton ‘MOLAB’ would be launched on a Saturn V rocket, with the crew following on a second Saturn V soon after. However, as budget restrictions allowed only one Saturn launch per Apollo mission, the MOLAB concept was abandoned in favour of a lighter vehicle.

General Motors were subcontracted to make the wheels and drivetrain for four rovers, which were then assembled by Boeing. One LRV was made for each of the Apollo 15, 16 and 17 missions, and an additional rover was used for spare parts after the program’s cancellation. As with the Lunokhod design, the LRV was engineered for multiple redundancies. The rule was that ‘no single point failure shall abort the mission and no second failure endanger the crew.’ The rovers performed well and also doubled up as a mobile remote control camera platform to record the crew’s departure from the moon. In all, they travelled a combined distance of 59 miles or 95 kilometres across the three missions. On the final Apollo excursion, astronaut Gene Cernan reached 11.2 mph or 18 km/h at the Taurus-Littrow valley, setting an unofficial lunar land-speed record that stands to this day.

Unlike the manned Moon missions, the first astronauts on Mars in the 2030’s will have at least eighteen months to explore their environment before returning to Earth. A mission of this duration makes it possible to explore a much larger area and demands a much more capable extra-terrestrial car.

One of the candidates for the job is NASA’s ‘Mars Space Exploration Vehicle’ or ‘SEV’, which follows on from the development of the MOLAB in the 1960s. Like the MOLAB, the SEV is much heavier than any existing rover, weighing 6600lbs, or almost 3 metric tonnes. With this extra weight, however, comes a range of new capabilities: the SEV can explore up to 125 miles or 200 kilometres on a single excursion, with a top speed of 12 mph, or 19 km/h. The vehicle can also carry a payload of 1 tonne of samples or supplies.

Inside the cabin, two crew seats can recline into beds, and a small bathroom with a showerhead produces a mist of water for bathing: an important detail for a crew that will spend a fortnight in close quarters. One of the strengths of the SEV concept is that it is a modular system, with omnidirectional wheels making it capable of docking with other modules to do a range of different jobs. Variants of the SEV include a spacecraft version that could visit asteroids, called MMSEV and an alternate version with enough propulsion to land on the Moon.

Riding into space on the upcoming SLS launch system, the SEV could be doing science in the Earth-Moon system by the mid-2020s. Perhaps astronauts in these vehicles will discover the first signs of life beyond our world, between the long shadows of the rovers that went before.

What Happened to the Giant Hovercraft SR-N4? – The Concorde of the Seas

Is hydrogen the future of flight?

What Happened to the Soviet Supersonic Jump Jets?