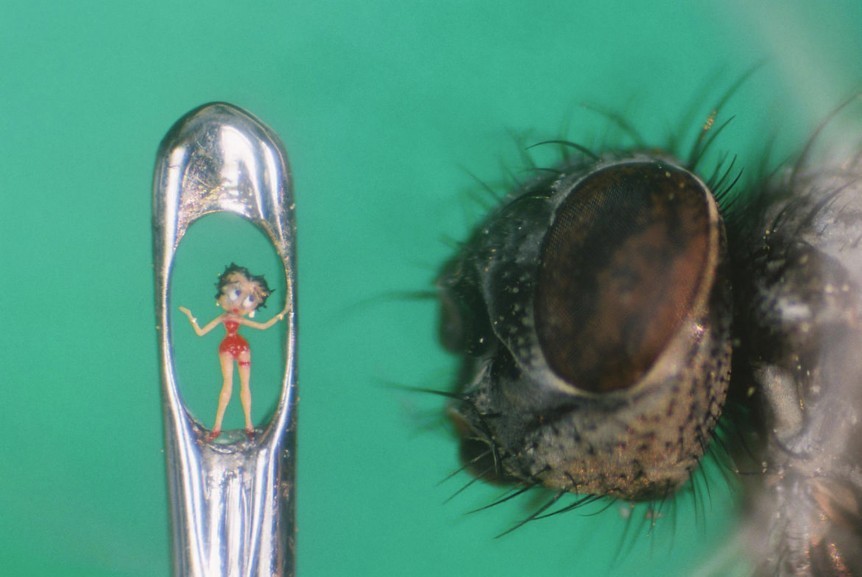 From sculptures so small you can’t see them fully in normal light to motors that can fit inside a human cell we look at 5 of the Smallest Man Made Objects in the World.

The sculptures made by Jonty Hurwitz and his team like this piece called “The Gentle Giant” have now reached such a microscopic scale that they even had to create a new method of filming to show them because they are so small you can’t see the fine details with normal visible light.

You have to remember that this elephant sculpture is just 1/10th of a millimetre high and yet you can still see the fine details of the wrinkles on the skin.

This and the other Nano sculptures including “Trust” the worlds smallest sculpture of a woman which is shown standing on a human hair are made using a nano 3D printer technique called Multiphoton lithography. This is where tiny layers of liquid polymer are laid down and then hardened with a focused laser.

The Smaller details of the works are at approximately the 300 nanometer scale, similar to the wavelengths of visible light and are therefore near impossible by the laws of physics to see in the visible light spectrum.

The only way to observe these works fully is through a non-optical method of magnification like a scanning electron microscope.

One of the problems with sculptures which are so small you not see them but they can be destroyed or lost very easily and in fact the sculpture of Cupid and Psyche shown here on the head of an ant was accidentally destroyed by a single touch a week before their publication on the internet.

Now if you thought that the previous sculptures where pretty amazing then this next one on the list will blow your mind.

Willard Wigan creates the smallest handmade sculpture in the world, figures so small that they can stand in the eye of a needle, in fact the very smallest sculpture he has made is of a motorcycle inside a hollowed out shaft of Willard’s own beard stubble and don’t forget these are made by hand, not by computer or robot or 3D printer but by hand.

These micro works of art sell for hundreds of thousands of dollars and collectors include the likes of Prince Charles, Elton John, Simon Cowell and Mike Tyson.

His work is described as phenomenal and the eighth wonder of the world and in July 2007 he was awarded an MBE.

In order to make these amazing sculptures Willard has had to make his own micro tools using things like and a sharpened microscopic sliver of tungsten or by attaching a shard of diamond to a pin to carve the figures and using a hair from a house fly as a paint brush.

To make this tiny sculptures Willard uses a 600x magnification microscope and enters an almost meditative state, slowing his heart beat and then doing the particular action between heart beats to keep his hand as steady as possible.

One of the problems of working on such tiny objects is the danger of even seemingly tiny external forces ruining the work and one of these was the vibration from traffic passing his workshop so he ended up working though the nights when it was quieter.

When working on one sculpture of Alice in Wonderland he accidentally breathed in too hard and the work was gone, so not a job you can do if you suffer from hay fever or fits of sneezing.

Smallest motor in the world

We’ve seen nano motors before but now Cockrell School of Engineering at the University of Texas has created a motor under 1micrometer in size which is 500 times smaller than a grain of salt and small enough to fit inside a human cell.

Now that’s pretty amazing but this nano sized motor is capable of run for up 15 continuous hours at 18,000 revolutions per minute, that’s the speed of a turbine in a jet engine. Compare that with most nanomotors that usually run at speeds between 14 and 500 RPM for just a few minutes.

The power come from an induced DC current to assemble the 3 part motor and AC current to operate them.

The motor has been successfully designed, assembled and tested in a non-biological environment, and has performed three tasks: it can move through liquids and both mix and pump biochemical.

The idea is that it could deliver a controlled amount of a drug directly to affected cells. To test its drug delivery capabilities, the researchers coated its surface with biochemical. The faster the motor spun, the faster the drugs were released.

Ultimately these could be used in nano machines that would not much bigger that normal cells and used to target things like cancer cells directly.

We are used to seeing computers getting smaller and more powerful but the biggest stumbling block to creating truly tiny computers it that whilst the physical components can be shrunk the power required was still high, so a tiny computer would need a big battery in comparison.

The breakthrough came in 2008 when the Phoenix processor was created which used a fraction of the power of previous processors and allowed much smaller self-contained computers to be created.

The Michigan Micro Mote is currently the world’s smallest computer at just 2mm x 4mm and requires an average of just 500 pico watts in operation and just 35 pico watts in standby or about a millionth of the power of a mobile phone on standby.

For a computer to be classed truly as a computer it must have an input, a processor to handle the data from the input and then output the results somehow.

The Michigan Micro Mote has a processor, a radio for wifi communications, a solar cell and battery for power, a photocell for communications and can have a variety of sensors like pressure, temperature, imaging etc making the Micro Mote a fully self-contained computer that can run on just the normal lighting in a room.

These different sections are stacked on top of each other into the tiny package. No physical connections are required because it can be programmed by picking up the high frequency strobed light signals from its photocell or via its two way WiFi which has a range of 2 Meters but they makers are looking to extend the range up to 20 meters.

The applications range from implantable medical chips and smart sensors to security and information devices.

Ever since the beginning of their existence, the makers of robots have taken inspiration from nature whether that’s in the form of man or of nature’s other wonders like the insects.

Up until recently Technological limitations have prevented robots from matching the size of the real life insects.

Robobee has been 14 years in the making, when it was first announced, it could fly for just a few seconds before crashing.

Now it can hover along a pre-set flight path and recently the team at Harvard have shown that they can get it to also swim under water using a modified flapping technic which was inspired by the Puffins ability to go from flying to swimming as they dive for fish.

The micro robot which is 2cm in length and weighs just 80 mg still has to fly with a tether to provide it power because there are still no batterys small enough to fit, yet powerful enough to make it fly.

The wings and body are made from flat layers of laser-cut carbon fiber, hinged together with embedded plastic, which are folded into three-dimensional frames instead of than piecing it together by hand.

In practice it works much like the pages of a pop-up book, reducing the complexity and time required in the build process.

It uses piezoelectric actuators which are thin strips of ceramic that expand and contract under an electric field to serve as the wing muscles.

The next stage of the research will be doing the reverse like birds and beetles can do when they can take off from the water and fly in to the air.

How safe are nuclear weapons?