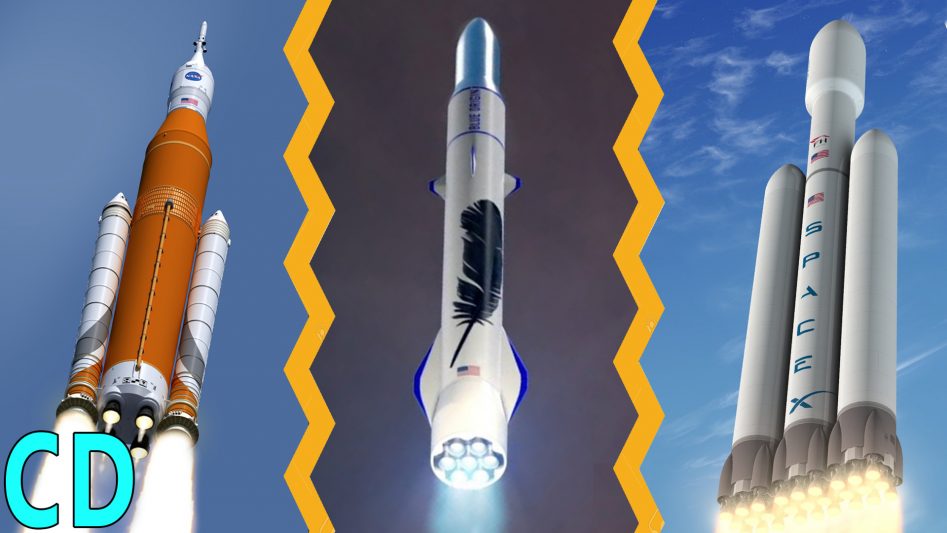 Moon missions are becoming a bit like buses, it seems as though you wait the best part of 50 years for a return trip to the moon, then within a matter weeks, two, turn up at once.

This is quickly turning into the new space race but this time it’s not between nation states but between private companies as Jeff Bezos, boss of Amazon and space company Blue Origin has said that they are looking to set up a base on the moon by the mid-2020’s.

This comes within a week or so after Elon Musk releveled SpaceX’s plans to send a couple of paying space tourists on a trip around the moon and back in 2018 on the as yet untested Falcon 9 heavy rocket and Dragon 2 crew capsule.

As if that wasn’t enough we are now hearing that the Trump administration is upping the ante by looking at getting NASA returning to the moon sooner rather than later in an attempt to possibly rerun Kennedy’s pledge to put a man on the moon, again within Trumps first term.

This time it’s not the Soviets he’s trying to keep in check but the other great communist regime China who also have their eyes set on the moon.

Although NASA would be providing the technical expertise, there is the possibility that they won’t be using NASA built rockets but instead using hardware built, paid for and supplied by private companies like Blue Origin or SpaceX.

As is Trump’s mantra of avoiding big government, there have been rumours that NASA’s SLS or Space Launch System and the Orion capsule, the remnants of the now-defunct Constellation Project, could be axed, though that would difficult as it could be said to be too big to fail after over 10 years development and in excess of $10 billion already invested and this would upset both the big NASA contractors as well as the republican senators that support them.

The thing is, it would much cheaper to use private space companies. Dropping the SLS would save over $3 billion per year in running costs, that would easily finance private space with many more missions for the money.

Though what’s more likely is that NASA will urged to speed up it’s existing plans and look to add men to the upcoming EM-1 mission to orbit the moon in a similar way to Apollo 8 in 1968 but that could delay the mission by a year to 2019 rather than sending it unmanned in 2018 as it was planned.

This would play well with the Trump administration in its first term and send a signal to the various nation-state competitors that the US was once again serious about space and the moon.

For now, the Blue Origin plan would be work alongside NASA to deliver cargo and supplies using a modified version of the vertical landing New Shepard rocket which could be launched using Blue Origins “New Glenn” heavy rocket which is currently under development.

The lander would land on the moon near the Shackleton crater at the south pole because there is permanent sunlight for solar power on the high points of the crater and in its depths, it’s permanent shade where there is believed to water ice which could the used by manned crews and also to create Hydrogen and oxygen for rocket fuel.

Robotic arms would be used to build lunar habitats and deploy rovers but not men. Lockheed Martin, Boeing and United Launch Alliance have all being working on concepts for manned lunar space stations which would act as way points for Mars missions and control centres for robotic operations on the lunar surface.

Then there is still the on going Mars vs Moon debate. The Trump administration has just signed a bill to add Mars exploration to NASA’s remit so we will have maybe another race between NASA and Elon Musks SpaceX to the red planet.

Whether they will join forces like the planned missions to the moon is still uncertain but it would make much more sense economically than having two separate missions racing to Mars.

There is also the EM-2 mission, which NASA is also working on which is a manned flyby of a captured asteroid on lunar orbit.

Why bother with asteroids some might say, but reason why they is seen as the next best step as they can offer large amounts of valuable minerals like iron, nickel, gold, platinum and water ice which again for creating Hydrogen and Oxygen for rocket fuel.

Mining asteroids may be the most profitable choice but it doesn’t carry the cache set by Apollo, even if the moon is pretty baron apart from water ice at the poles and the much-touted Helium 3 and some platinum-group elements from asteroid impacts.

Whichever way things go, its becoming an exciting time once more for space as we see if the will of the private space companies is matched by the political will and cash from governments to follow it thru.

How One Camera Changed NASA and How We Saw the World

Concorde’s Overture. Will We Have a New Supersonic Jet Soon? – Boom SuperSonic